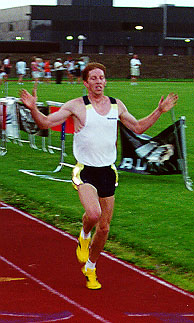 Ann Arbor, Michigan - RunMichigan was able to talk with Kevin Sullivan after he returned from his most recent trip to Europe. Kevin has continued his success on the track this summer by setting a new Canadian record in the Mile in 3:50.26 on July 28th in Olso, Norway. The Mile record followed the new Canadian record Kevin set in 1500m by less then a month. Here is a RunMichigan chat with Kevin about his record setting Mile race and about his preparation for the Canadian Track and Field Championships August 11-13th at Centennial Stadium, University of Victoria, Victoria, British Columbia.

RunMichigan: - In one month you have set the Canadian record in both the 1500M and the Mile, how does it feel?

Kevin: It feels great! The whole summer has been great for me. With the exception of the first two 800m races I ran this year at Hillsdale and at the University of Michigan, I think every race has been tremendous.

RunMichigan: - What were your goals going into the 2000 Track season?

Kevin: The first and foremost goal coming into 2000 was to make the Canadian Olympic team. My trials are coming up August 11-13, so I still need to stay focused in order to achieve that goal. Secondly I want to make the Olympic final but this all hinges on the first goal being met and then concentrating on taking each round one race at a time. My third goal was to improve my 1500m and mile Personal Best's(PB) which I have already accomplished. And my fourth and final goal is to make the Grand Prix final which at the moment looks to be a certainty.

RunMichigan: - What was your plan going into the Olso Mile?

Kevin: Mainly I wanted to stay relaxed and not get in over my head early on. With El Guerrouj Hicham claiming to want to run 3:42 the pace was supposed to be extremely fast (the rabbits were supposed to be 2:46 at 1200m). Then I just wanted to focus on the pack after the gap, that usually opens up in a race this fast. I kept myself in good position and was able to move by a lot of runners in the last 300m, who went out too hard early on.

RunMichigan: - Did you feel you were on a record setting pace in the race?

Kevin: I knew we were running fast as I could see the leaders splits (the clock stops when the leader passes each lap, so you can only see his split and not your own) and I was still very close to the front of the pack.

RunMichigan: Do you feel like you can run faster then 3:50.26 for the mile?

Kevin: Yes I think I have another 1-2 seconds in me right now. I only flew into Oslo from Detroit two days before the race, so I was battling the 6 hour time difference as well as the field. I definitely felt a little flat out there. I feel I ran significantly better in my next race 4 days later (1500m in Stockholm 3:32.89 for 2nd place).

RunMichigan: Can you describe from start to finish how the race unfolded?

Kevin: The pace went out hard as is usual in these types of races. I got out well and moved into position down the backstretch. Coming into the homestretch the first time I settled on the curb, and the group in front of me suddenly slowed and the rest of the field except Mark Carrol went by me. I split about 56 seconds for my first lap. I basically maintained my position on the second lap splitting about 1:53 at 800m. I started to move outside and get into position on the 3rd lap but the pace for my group slowed and I only came through 1200m in 2:53. I made a big move down the backstretch and coming off the last turn was in 5th place. I battled down the homestretch and just nipped Rotich at the line in 3:50.26, a 1.99 sec PB and breaking the Canadian record by 1.29 seconds.

RunMichigan: What type of training have you been able to do between your 1500 Meter and Mile records?

Kevin: I was doing a lot of strength work between the two records. My mileage got back up to 75 miles/week and my hard sessions included 4 mile tempos and longer intervals such as 1200's, 1000's, and 800's. We do so much speed when we are getting ready to run fast, that sometimes strength is neglected. So for the 2 1/2 weeks between the European racing we made a real effort to work on my strength.

RunMichigan: What do you credit with your great performances this summer?

Kevin: I've had 19 months now of injury free training. That is the single biggest reason for the way I am racing this summer. Plus a fall base period with significantly higher mileage, than I had ever done before.

RunMichigan: Do you feel ready for the Canadian Track & Field Championship?

Kevin: I am definitely ready. Everything to this point of the season has been gearing towards that meet.

RunMichigan: Where will your next race be at before the Championships?

Kevin: I raced Stockholm on Aug 1st and I am now back in Ann Arbor. I will not race again before the Canadian championships.

RunMichigan: What type of training will you do after the Canadian Track & Field Championship?

Kevin: The first couple of weeks will be a mixture of speed and strength work, while I stay on my weights and plyometrics. In the last three weeks before the games it will switch to more of an 800m type training program with a little bit of 1500m pace work thrown in there to mix it up a bit.