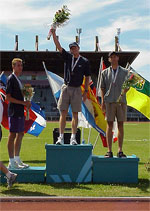 Ann Arbor, Michigan - Ann Arbor's Kevin Sullivan qualified for the the 2000 Olympic Games August 12th at the Canadian Track & Field Championships in Victoria, British Columbia. Kevin won the Men's 1500 Meter race which automatically qualified him, since he has already made the 'A' Standard time. RunMichigan was able to talk with Kevin Sullivan about the Canadian Championships and his preparations for the Olympics in Sydney, Australia.

RunMichigan: - How does it feel to be the Canadian 1500 Meter Champion and a member of the 2000 Canadian Olympic Team?

Kevin: It feels great to be the Canadian champion this year since I haven't won our national championships since 1995. Making the Olympic team was more of a relief than a huge emotional victory. I had pretty much known for the last year that as long as I stayed healthy and didn't make any dumb mistakes at the trials that I would be on my way to Sydney.

RunMichigan: - What was your goal going into the 2000 Canadian Track & Field Championships?

Kevin: Make the team. That was my only concern, which for me meant finishing anywhere in the top four.

RunMichigan: - Did you think going into the race that you could win with a 3:46 or did you think you would have to run faster?

Kevin: Without Graham Hood (3:34 last year, 3:33.94 PR) in the race due to injury I was ranked number one in the country by 10 seconds so I was not anticipating a fast race unless someone decided to make an attempt at the Olympic standard which would have been fairly ambitious for most of the guys in the field.

RunMichigan: - Can you describe how the 1500 meter finals unfolded?

RunMichigan: - What did you do different in 2000 to prepare yourself for the Championships?

RunMichigan: Now that you are a member of the Canadian Olympic Team, what are the most important things you need to do before you take off for Australia?

Kevin: I just need to stay healthy and remain consistent in my daily schedule and training. The last thing I want to do now is make any drastic changes to a program that is obviously working very well.

RunMichigan: What type of training will you do once you get to the Canadian Training camp in Austalia?

Kevin: I will get to Australia on Sept 1, and much of my training will become more speed oriented 800m type workouts with a few 1500m pace workouts thrown in there to mix things up. I also plan on running two races while I am there, one on Sept 10, and the other on Sept. 17. I will probably run one 800m and one 1500m, with the possibility of adding one more off distance (800m or 1000m) race at a twilight meet if I feel I need it.

RunMichigan: Have any of the Olympic tune-up meets been setup yet in Australia?

Kevin: As I stated above there are the meets on Sept 10 and Sept 17 that I plan on running in and there are also a number of twilight meets in the area of our training camp (Couran Cove, near Brisbane).

RunMichigan: What will your racing schedule be for the Olympics?

RunMichigan: How fast do you feel you will have to run in the 1st round and Semi-finals to reach the finals?

Kevin: It's very hard to tell how any race is going to go at a major championships. The race could be anywheres from 3:33 to 3:46.

RunMichigan: What do you feel will be your greatest challenge at the Olympics?

Kevin: The biggest challenge for me will probably be remembering to treat every single race like it is the final. I really feel this is one of the keys to getting through the qualifying rounds.