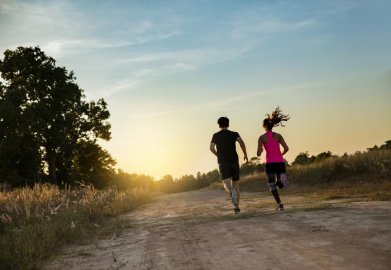 Just a precursor.  “The dog ate my homework.”  Have any teachers actually fallen for that old excuse?  Likely none.  But I will give it second thoughts after this week.  I was late getting my column in because, well, “the dog ate” it.  Yep, Andy, our now 20-month old Golden Retriever, found my hand-written column on the floor, blown off my desk by a gust through the window.  Andy didn’t really eat it, but he did chop it up enough so it was impossible to read and put on the computer.  So, “The dog ate my homework” might now garner a little sympathy from this teacher.  BTW, I started my 51st year in teaching last week.  That seems like a long time, about four years longer than I’ve been running.

Paper or plastic?  Diet or sugar?  Regular or premium?  Tastes great or less filling?  Black or with cream?  Yes, people are faced with many choices every day.  In their own daily endeavors, runners and their running are no exceptions.

We have a lot of decisions to make, although I’d guess we don’t always realize it or consciously make some of them.  Where to run today?  What shoes to purchase?  How long or how fast to run?  What races to put on our calendar?  And more.   The late Dr. George Sheehan termed each runner “an experiment of one.”  Different runners have different goals, different bodies, different favorites.  There are a lot of choices to satisfy our needs and wants.

All of this came to mind a couple of months ago in an exchange I had with my running buddy, Gus LaRuffa.  I mentioned that I run on a variety of running surfaces in any given week, from concrete and asphalt streets to dirt and gravel back roads.  I also find myself on paved bike paths, sometimes gravel and sometimes asphalt, as well as padded deep woods trails.

Gus and I began trading ideas.  He said, “I laugh when they say asphalt is better than concrete.  I’m sure it is, but how much ‘better?’”  It’s an idea worth considering.  Running on soft trails might be better than running on paved subdivision streets.  But with the possibilities of stumbling on roots, rocks, and branches, “how much ‘better?’”

He recalled, “I always liked the gravel shoulders,” but he conceded one of my points.  “You are right.  A severe slope,” a sharply-angled camber, “is not good.  But even running on a track going in the same direction puts a lateral stress on your knees.”

“The woods are the best, but you really have to pay attention or you can go down on a root or rock or downed limbs,” as I had done earlier that week.

Recalling, he went on, “I think my biggest problem was my weight.  I used to be 185-195 pounds.  That’s too much weight for anyone’s joints, at least mine.”  Trails can help, but regardless, that didn’t stop LaRuffa from finishing more than a dozen marathons.

The discussion intrigued me so I asked some other runners about their choices for running surfaces.  Bill Khan replied, “I’m 58.  As I’ve gotten older and injuries have taken a toll, I prefer running on trails for the softer surface.  The Catch-22 is that a lot of trails have steep downhills and uneven terrain that can cause other issues for me.”  Philosophically perhaps, he added, “All in all, I enjoy running in the woods over running on the roads.  I’ll take that trade-off.”

Stu Allen has tried them all.  “While I have and continue to run many different surfaces, my favorite is the single-track trail.  The soft dirt under my feet is easier on my old bones.”  A bonus for him is that “Single-track trails usually lead you into places of Nature’s beauty and peacefulness.”  Stu gets no argument from me.

Quipping, Amy Masternak admitted, “Trying to choose just one surface is like trying to eat just one potato chip.  Can’t do it!”  But she does have her favorites.

She said, “Trails offer a way to get your run in while enjoying nature.  It strengthens a more well-rounded group of muscles because the terrain and elevation change as you go.  The track offers a surface safe for speed while being protected from potholes and the pounding of concrete.  Blacktop paths through parks allow those that can't do not wish to run trails a place to also experience all the greatness the outdoors have to offer.”

For Herman Smith, it’s all “simple, quick, and easy.”  The long-time runner said, “My favorite is right out my front door, the subdivision roads and sidewalks near my home.”

Another of my running buddies, Bob Drapal, chimed in.  “As a senior runner (76) I prefer running flat surfaces.  Asphalt would be my preference.  In my younger racing days I remember doing a 10K that went for asphalt to concrete and back to asphalt.  The transition was immediately noticeable.  So I avoid concrete surfaces.  Grass and dirt and gravel can be uneven so I try to avoid them, too.  Potholes are also a pain.  And treadmills are boring.”

Todd Matthews noted, “I prefer outside on asphalt.  Sometimes, though,” he explained, “off-road is nice to change things up.”  That’s a good idea.  But he’ll make concessions.  “On a bad day, rain or snow or bitter cold, I prefer the treadmill.”

Tom Cameron is a running version of a polyglot.  “I like all surfaces, but they [each one]  have specific purposes.  Trail for easy days, track for speed work, bike paths for hill work and marathon training.”  But he cautioned, “No trails the month before a marathon!”

Me?  As I noted, I alternate running surfaces.  Some days I’m like Herman Smith.  How easy and convenient to just head “right out my front door.”  Other days, the trails beckon me like they do Amy Masternak, Bill Khan, and Stu Allen.  I like the softness and the reunion with Nature, too.  Like Todd Matthews and Bob Drapal, though, the asphalt is safe from the pitfalls of trails and the hardness of concrete.  And I’ve often followed Tom Cameron’s suggestions, different surfaces for different goals.

Treadmills are not for me, at least not yet.  My son and grandson have run on them, but I can count on one hand the number of times I’ve been on a treadmill.  To me, it didn’t seem like running.

In the end, as Gus LaRuffa commented, “Everyone is different.  Some people can go for fifty years and never have a problem [caused by running surfaces].  Others can seemingly just look at concrete and get injured.”

Each runner must discover what type of surface works best for him or her.  As Dr. Sheehan noted, “We are each an experiment of one.” 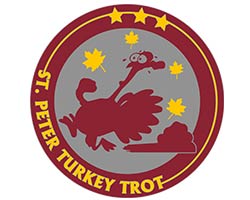