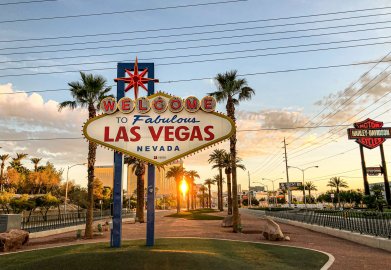 I’ve always enjoyed running in new and/or different places.  Oh, I like my usual daily routes at home; I can choose from about a dozen different ones depending on my mood, the day, how much time I have, and other factors.  But running away from home brings a change of scenery and even pace; it helps to keep my running fresh.  And, on the road, it is often an adventure, a great way to explore and even sightsee.

Many such running adventures come to mind.  It’s been quite a few years, but running in Downtown Toronto was always cool.  I always look forward to a return to my alma mater, Amherst College, and the runs on campus there.  There are Ellicottville and the Old Lake Shore Trail on the eastern shores of Lake Erie in western New York; the never-ending hills of Ripley, West Virginia; and more.

What brought all this to mind was a recent trip to visit Matt in Las Vegas.  I know this might cause some raised eyebrows, but I really enjoy running there, especially on The Strip, even in the summer.  We (Ashley, Cody, Grandma, and I) were there in mid-July.  Most often, we stay in a hotel on The Strip, combining a visit and a vacation of sorts.

One of my all-time favorite races was the Las Vegas Rock ‘n’ Roll Marathon in 2011.  Matt invited me to come out and run it with him.  I was hesitant, but when he claimed it was to be run at night, on The Strip from Mandalay Bay on the southern fringe up to Downtown (Old Las Vegas) and back, I was sold.  Well, I first confirmed that was true, that The Strip would be shut down to vehicular traffic for the race.  And it was really cool—all the lights and sights, the thousands of spectators—a whole lot of fun.

Yes, running there brings challenges.  Of course, there is that heat in the summer, from maybe May through at least September.  It’s usual to have those 90-degree temperatures, although a couple of mornings this time were in the mid-80s.  “But it’s a dry heat” is the joke.  Well, there is a big difference in the humidity here and there and it affects running.

I’ve often said I prefer running in the 90s there with the far lower humidity (usually less than 10%!) than here at 70 degrees and humidity in the 60 and 70% range.  I’m serious.  It is necessary, though, to remember to hydrate properly because the “schweat” often dries almost immediately and runners don’t realize how much water they’ve lost.

This July week was a bit unusual.  The temperatures were high, but the humidity was comparatively so, too.  Each morning saw humidity close to 40%, quite unusual.  With the relatively high humidity coupled with the heat, well, these runs were a bit more challenging.

As usual, it is pretty cool, both figuratively and literally, to run past the handful of casinos (such as The Flamingo) which keep their doors open allowing the air conditioning to reach the sidewalk.  Talk about refreshing.  Some outdoor spots have sprayers, spewing a cool mist that is always welcome.

The Strip is flat except for the many pedestrian overpass crosswalks.  And in the past couple of years, new ones have been added to avoid the dangers of the crowds on the busy Las Vegas Boulevard.  The overpasses are almost like adding step workouts in the middle of the run.  Sometimes I run the steps and sometimes I walk them, both up and down.

Due to the heat mostly, but also so we can get an early start on our activities, I run pretty early—about 6:00 AM or even sooner.  Being on the eastern edge of the time zone, the sun is well up by then; that is both good and bad.  The Strip is not nearly as crowded as later in the morning and, especially afternoon and evening.  But they are far from empty, which I enjoy.

Many workers are already out there, sweeping and washing the sidewalks, tending the gardens and other vegetation in spots, etc.  Of course, there are still some all-night drunkards and gamblers reeling down the street.  And it’s not unusual to see, ahem, ladies of the night still prowling.

But it might be a surprise to see how many other runners are out there.  I’m still surprised, after all these years.  This Sunday morning, close to 50 of them accepted the challenge of running The Strip in July.  (Yes, I started to count, but lost track when I got to 40 or so, about a mile from the hotel.)  Many other people were walking (I didn’t count them!), not just strolling, but it looked like for fitness.  (And, at least Sunday morning, all of the treadmills in the Park MGM fitness center at the hotel were being used.)  Almost always in passing each other, we exchange waves and/or smiles, as if to share our craziness of running in 90-degree temperatures.

Depending on how early I get out there and even clouds, I plan my run to avoid the sun as much as possible.  So usually I run on the east side of Las Vegas Boulevard.  It is far shadier there and the already hot sun is not reflected off the buildings, too.  An unexpected bonus is that there are fewer of the pedestrian overpasses on the east side.

It’s also interesting to see the changes The Strip has undergone in the 15 years Karen and I have been going out to visit Matt.  (We had never been there until Matt found employment.)  There always seems to be on-going construction, renovating casinos and hotels or even building new ones.  Some hotels and casinos have been razed (The Frontier, Sahara, and Riviera come to mind.) while others have been raised (The Aria, Cosmopolitan, and Resorts World to name three.).  Much renovation and renaming has also been evident.  (The old Imperial Palace became The Quad and is now The Linq while the Monte Carlo’s extensive renovations led to a new name, The Park MGM.)  It’s fun to visit two or three times a year and run by the changes.

Still, I’m pretty sure I wouldn’t want to run in Las Vegas all summer long, from May through September.  That reminds me Michigan, despite the unusual humidity of this summer, is still a great place to run—year-round.