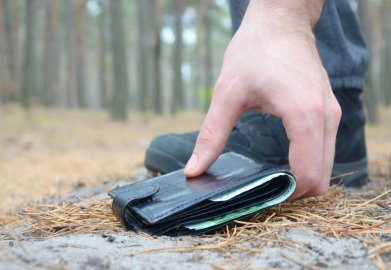 “Treasures,” that’s what I call them.  They are the items I find while out on my runs or on my bike.  I don’t really have to look for them.  Usually they sit right there on the shoulders of the roads or just off them.

Depending on what type of run I am doing, I may or may not bother to stop and get them.  For instance, if I am running with friends, engaged in conversation, I’ll pass them by.  If I am doing something a bit more structured, a particular workout such as hill repeats or fartleks, I will let them go, too.

But if I’m out there alone, slogging my way through a nice easy run, I’ll grab something that looks interesting—a treasure.

Usually they are small and light enough to put in my pockets or just carry in my hands.  Several friends are avid golfers.  I’ll bet over the years I have found hundreds of golf balls to give to them.  That’s not an exaggeration at all.  Not a golfer, I have no idea if the balls are good or not, but I give them away regardless.

Oh, I pick up money, of course.  Mostly it’s nickels and dimes, with a few quarters, rather than pennies.  My old running friend Patty Pape coined them “road change” (pun intended).  It seems the coins come in bunches; that is, when I find one, the next few days bring others.  And, oddly I guess, if I pick up a quarter for example, usually the next few coins are quarters, too.

I’ve found real money, too—bills!  The first sizable bill, $10, I found, well, a long time ago.  Those ten dollars were enough for Karen and me to have dinner at our favorite Chinese restaurant.  That’s how far back that was: two dinners for $10!

While mostly the “paper” are $1 bills, I have found some twenties, Jacksons.  I don’t remember how many of them, but a few.  I do recall that twice I found $50 bills.  One I gave away a couple of days later; someone needed it more than I did.  The other went into Matt’s college fund.

I’ve probably found a dozen or more wallets, some with money in them, money I didn’t keep.  Over a period of a couple of months, I think I discovered three or four billfolds or purses.  When I started to call the police about the last one, Karen jokingly suggested I reconsider.  Maybe they might begin to get suspicious.

Most of the wallets had drivers’ licenses and I looked up phone numbers from the names and addresses, returning them that way.  Once, the wallet belonged to the son of a colleague from work.  The boy had been worried sick about losing it.  His dad came over to claim it, saying his son probably put it on the roof of his care when he drove away from a nearby lake.  No, I didn’t accept the reward that was offered.  I never did.

One call I made was unusual.  The owner of the wallet didn’t seem too concerned.  He told me I could drop it in the mail, “if you want.”  If I “want?”  I asked about the credit cards in there, but he was equally unconcerned.  I did pop it in the mail, but never heard anything again.

Years ago, when I ran before work at 5:00 AM, I came across a pillow case along one of the back roads.  Picking it up, there were items inside, but in the dark I couldn’t see what they were.  Finishing my run, I turned it over to my boss after I cleaned up and headed off to class.  He notified the sheriff’s deputies.  Two deputies arrived at my classroom door, asking to speak with me in the hallway, which drew more than a few curious looks from my students.  There had been a break-in overnight just down the road from the school.  The items in the pillow case had been taken from that home.  But again, that’s the last I heard of that.

Tools are pretty common treasures.  I’d guess they fall off trucks rather than being tossed out of windows by their owners.  Some are in good shape and worth keeping.  A few screwdrivers and wrenches (including two big pipe wrenches which have come in handy over the years) as well as files and wire brushes have been added to my workbench.

The most unusual treasure I’ve come across was a machete.  A machete?  Well, that’s what the deputy called it.  It had a long blade, maybe 22-24 inches, crescent-shaped like a machete.  The handle was made of a hard plastic.  The blade was a bit rusted.  The deputy and I figured, due to the rust, it had been outside on the side of the road, hidden in the near weeds, for a while.  But I hadn’t seen it on any previous runs past where I found it.  When I called the Sheriff’s Department, the dispatcher listened to my description of my discovery and asked with some hesitation, “a machete?”  I guess so.  Yep, she would send out a deputy.

He arrived, I showed it to him, and he immediately confirmed, “a machete.”  He asked when and where and a few other questions, but didn’t seem too bothered by it.  But he did refer to it as a machete several times.  In fact, he started to walk away and I asked what to do with it.  He replied, “You can keep it.”  I said I planned to toss it in the trash and he appeared, initially, fine with that.  He actually got back in his squad car, but must have done some thinking.  He got back out, took the weapon, and said he’d call around to other stations and departments to see if there had been “any reports.”  He asked if I wanted it back if nothing showed up, but I told him, “just pitch it.”

A few times I’ve found bicycles, likely stolen and then abandoned.  I called them in to the sheriff, too, and the next time I ran by, each was gone.  I don’t know if the police took them, the owners discovered them, or what.

Once I came across a scooter, a new one, out in the middle of nowhere.  Still there a couple of weeks later, unclaimed, I drove past in my car, picked it up, and took it home.  This was years and years ago.  Michael, Ashley, and Cody had some fun with it for a long time.

While hardly treasures of this sort, I frequently see a great deal of wildlife while I run.  I know that’s probably not all that unusual, but I still get excited.  I guess it’s “You can take the boy out of the city, but you can’t take the city out of the boy.”  Or something like that.  Next month I will tell of my encounters with some of them.