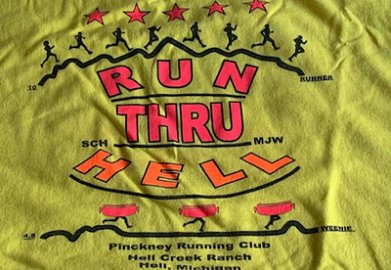 What is it with runners’ fascination with race tee shirts? I know I have one, a fascination that is. And I have a lot of race tees. And from what I’ve observed, I don’t think I’m alone.

Spring cleaning. A few weeks ago, a bit early this year for Karen and me, we started in of the
closets, garage, basement, and, when the snow cleared, the yard. A new target was the loft, a place
Karen has been after me for years to straighten up. To clear up the dining room table from my school
work and frequent pounding away on my computer, she talked me into creating an “office” upstairs.
“Office” might be a stretch since it now entails a solitary desk and chair. But it necessitated a sizable
purge. More books, about ten Xerox boxes, were donated to a local library, one I finally found willing to
take donations due to CoVid restrictions. And I must have pitched (in the recycle bin, of course) two
thousand or more articles, columns, reviews, etc. that I have written in more than forty years of writing.

Some of them included running pieces. A handful I mailed to people who were the subjects of
the articles. Some attracted special attention. One had to do with race tee shirts and dovetailed very
nicely into the clean-out of my closet. There I found more tees to let go and donate. Between the two,
memories of races past came back, mostly fond ones.

One of the articles cited the “Run Thru Hell.” I immediately went to look for the tee shirt, which
reads “I RAN THRU HELL.” I have run Harrison Hensley’s wonderful race quite a few times, but
wondered if I still had the tee.

First, the Run Thru Hell. It’s a tough race. Hensley created a course with hill after hill, mostly on
country dirt roads, almost always raised into clouds of dust by the hot and dry August weather and the
thousand or so runners. A runner who runs through Hell, Michigan earns that tee shirt. It was a great
tee shirt and a great race, for years one of the most popular in Michigan.

As noted, I have run Hell a number of times, but some years back when Karen and I were doing
some renovations to the house and were clearing out some clutter, I couldn’t find the shirt. I wanted one! They are so cool! I ran the race that year, although I don’t remember which year, and earned my
tee. I found it! And, especially when I wear the shirt out-of-state, I get frequent comments and
questions.

For runners, including me, race tee shirts are prized possessions. They serve as trophies and
bring back memories, fond and otherwise. For me, a student and teacher (I just concluded my 50th year
of teaching last week!)) of history, my tee shirts provide a glimpse into my running history.

In 2005, I donated 150-200 tee shirts to a Katrina Relief Program. Of course, I accumulated
many more since then. This time, as with others, when I came upon my cache of tees, Karen suggested,
“Put them in the Goodwill, Purple Heart, or Freedom Works stuff.” Horrors! I couldn’t do that.

It took me the better part of the weekend and even a few weeknights to wean them out, but I
did. But as I did, what memories they revived! I recalled something from almost every tee shirt, er,
race.

A few shirts are/were more special than others. I still have the short-sleeved tee from the first
race I ran, the 1986 West Bloomfield Half Marathon. (“First race, a half marathon?” Yep, what did I
know?) I also have mementos from my first Free Press Marathon, also in ’86, and my Bostons.

The now-defunct Huron Valley Hospital Runs were held for ten years; I still had the tees from
each one of them. No longer; I kept one and put the others in the donation pile. I have kept two from
the Great Pizza Challenge in Flint, one I ran with my son Matt and the other with my grandson Michael.
I’m not certain, but I think they both beat the old man.

I came across the one from the one-time-only “I Ran the Reuther” 5K on I-696, in 1989. The
race, the great idea of Ed Kozloff, president of the Motor City Striders, was held on the freeway the day
before it opened to vehicular traffic. I remember it clearly. The race was delayed almost an hour because the turnout was overwhelming; not a few hundred, but a few thousand turned out to christen
the freeway. Boxes of Prince spaghetti/macaroni were handed out. Is Prince still around?

I don’t know if anyone would wear a shirt I had from a race in Lackawanna, NY. Visiting
relatives, I found an evening 5K. The tee was a tie-dyed blue and green monstrosity. I don’t have any
idea why this wasn’t donated years ago. But I remember the race well. Post-race refreshments included
grilled hot dogs and hamburgers, as well as beer.

I still had quite a few shirts from the Kensington Challenge and Big Bird races. They’d make a
nice quilt. I loved the Challenge! It was a unique distance, 15K, and was a real challenge, quite hilly. It
also gave me a chance to brag to my running buddies that I crossed the finish line ahead of Doug Kurtis!
I hesitate to add that Doug pulled off the course a few yards from the end.

I found more than a dozen Big Bird shirts, including the one from last fall’s virtual race. I’ve
missed only one since 1989, that absence due to a family wedding in New York. I had mentioned to my
aunt that I’d have to miss the Big Bird, so she went out and found me a race in Buffalo the morning of
the wedding. They high school mothers’ club which served post-race refreshments didn’t know about
bananas, bagels, and the like, so they force-fed us home-made cakes, pies, and cookies.

And I still had quite a few Crim tees. All those hot, sticky August Saturday mornings. I
remember limbering up one year with the Kenyans and German standout Uta Pippig near the UM-Flint
campus. OK, they were warming up and I was parking my car, but why quibble?

I smiled at some from more than 20 years ago. I ran a couple of those races on just a few hours
of sleep. After his Friday night high school football games, Matt and I would watch game tapes until the
wee hours of the morning. Then my buddy Bob Drapal would pick me up at 5:30 or so to head up to
Flint. For some reason, I don’t remember being tired.

I was saddened a bit when I discovered about five or six tee shirts from the evening Light Fest 8K
held on Hines Drive to open the Christmas Light Festival. Those shirts glowed in the dark. It was a
special treat for me to get home, turn off the lights in a bedroom, and watch Michael, Ashley, and Cody
(my grandkids) get excited at the glow. For quite a few years, Bob Drapal and I ran it from finish to start
and back to the finish (ten miles) to beat traffic, avoiding the shuttle. And we’d reward ourselves
afterward with a stop for our favorite pizza. Yum! After Bob stopped running it, I ran it a few yeas with
my friend Carrie Farnum; Karen and some other friends walked the five miles. And we all continued to
stop for pizza. Saddened? For some reason I don’t recall, I missed a year a while back; maybe I had a
Tuesday evening class. String broken, I haven’t run it since. I’ll keep one of the tees, though.

One of the tees led me to laugh out loud. Way back when, I was pretty possessive about my tee
shirts. I earned them; only I should wear them. Karen was running then, with a friend. I suggested they
run a race and could then have their own tee shirts. I was asked to find a race we all could run.

Chuckling at the shirt now, I don’t remember Karen laughing then. No, not at all. First, it was a
very tough race, with hills. She was running the race, her first one, “for the tee shirt.” The shirt ended
up not “her color.” She was also dismayed at the logo, a bit odd if I say so myself.

I could go on and on, as could most runners, with the memories race tee shirts conjure. Most of
the tees have been donated, years ago or more recently last month. There are a few I wear regularly, to
shop or go to ballgames. A few others are for dressing up; outside of class, none of those monkey suits
for me.

I once said, “Get rid of them? Never! When I go, they can go.” No, I don’t regret donating
them. Karen is happy and it’s always nice to be able to do a small bit to help others.