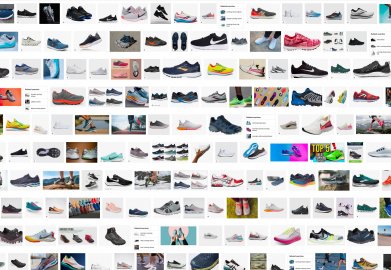 My blind running buddy, Michael Holmes. laughed as we spoke on the phone.  “You need new shoes,” he chuckled.  Although due to arthritis he can no longer run, Holmes is pretty savvy when it comes to exercise in general and running in particular.

He had asked me how my running was going.  I replied, “Great!”  Then I mentioned my feet and knees were a bit sore.  Sure enough, as Holmes (and I) recognized, a change of running shoes made the aches disappear, practically overnight.

I’ve known this for a long time.  When I get a little soreness and pain in my feet and legs, it’s time to switch shoes.  But I’m pretty, ahem, frugal.  So knowing when to bring out the new pairs and actually doing that might develop into a bit of a time lag.

That, though, led me to thinking.  When is it time to get rid of those old pairs, often comfy and broken in just right, and spring for new ones?  How long should running shoes last?  What determines that?  Is it miles?  Is it time, as in weeks or months?

Conventional wisdom or at least opinion holds that shoes should last for 300 to 500 miles.  That’s a broad rule of thumb and is wide range.  Veteran age-group runner Mark Cryderman uses the 500-mile benchmark.  And, generally, so do I.  That is, when I close in on 500 miles, those little aches and pains begin to crop up.

But there are other factors to consider.  One is the runner.  How big is she/he?  That is, how much does he/she weigh?  The running gait is another thing to consider.  How often do the shoes get used—daily? every other day? a few times a week?  On what surfaces are the shoes used—trails? dirt roads or paths? the track?  paved streets or roads?  Are the shoes used exclusively for running or are they worn for other daily activities such as taking the dog for a walk, grocery shopping, or just meandering around the house?  What cushioning materials are used by the manufacturer?  Some have longer lives than others.

Runners needn’t wait for those slight aches and pains in their legs.  There are other signals that it’s time for a new pair of running shoes.  Look for wear on them, almost like the bald spots on the tires of a car.  And, if the wear is uneven, perhaps you are running in the wrong shoes; it might be worth considering a different shoe style.  If your shoes have lost their bounce, their cushioning, that’s another sign.

Just like the late running philosopher Dr. George Sheehan referred to each runner as “an experiment of one,” there’s no simple right answer for all runners.  But there are some tips that each of us can use.  I asked several seasoned runners, those who really have experience, about this, when they switch shoes.

It would be hard to imagine anyone with more running miles in a lifetime than Doug Kurtis.  The Michigan runner now residing in North Carolina has several hundred marathons (and still holds world records and bests) and countless shorter races under his belt, not to mention all the training.  It certainly wouldn’t be a stretch to suggest he’s put in well over 100,000 miles of running.  That’s a lot of shoes!

Kurtis subscribes to “the general rule of 500 miles on a pair of shoes, which is probably good.”  But, he admitted, “Usually I have no idea how many miles I have on a pair of shoes.”  Instead, he said, “I look for wear.”

He added, “I think mileage can depend on how tough you are on shoes.”  He explained, “I’m light on my feet so I don’t wear out shoes as quickly as some pavement pounders might.”

Adding some advice he provides to others, “At my occasional talks, I often suggest that if you find a shoe that works for you, by two pairs.  I think it helps to alternate shoes.  Let them dry out for a day and they’ll last longer.”

“I usually have a dozen pairs of shoes depending on the kind of workout I’m doing—long distance, speed, or trails.”  He also quipped that his shoes must “match my outfit.”  Of course.

Scott Hubbard has long been associated with Michigan running.  He was a top-flight runner, well-known writer and columnist, certified course measurer, and frequent finish-line announcer.  And, many years ago, he recommended shoes for me, the brand and style—I still run in that brand and style, at least their reincarnations!

He echoed Dr. Sheehan.  “First off, I’m just ‘an experiment of one’ when it comes to the life of a pair of running shoes.”  He, too, watches for wear.  “For the most part, if the bottom layer wears through to the next, it’s far enough.”  Since some of the current shoe manufacturer’s “don’t differentiate layers, go by the feel and general wear.  If they just don’t feel as cushioned, it’s time for new.”

Hubbard went on.  “I had no hard rule about number of miles, but they [shoes] typically never got more than 500 and more often 400.”

He offered another consideration.  “At today’s prices, man….  That may sway how long folks wear their shoes.”  He recalled, “I never paid more than three-quarters of even the cheapest shoes these days.  I wore out dozens of [Nike] Pegasus.”

Adding perspective and insight was Randy Step, long associated with the state-wide Running Fit chain of stores.  He readily admits in his frequent running newsletter, he’s “an obsessed runner.”

He said, “I cringe when I hear someone say, ‘My knees are hurting.  I guess it’s time for new running shoes.’”  (Oops!  That’s sometimes me.)  Step advises, “Running pain should never come from your shoes.”

“Ideally, you find a pair that works for you.  After they are about half worn out, you buy a new pair.  On long or hard days, you wear the new pair, giving you the protection you need so you will never run long in old shoes.  On easy or short days, you wear the old older shoes.  Eventually the newer shoes will he half worn out and,” and he quipped, “the old ones will turn into gardening shoes.”  Then you buy new shoes for the rotation.”

Mileage, he thinks, will vary.  “It depends on your stride, weight, and surface you run on.”  He surmised “somewhere between 300 and 600 miles.”  Personally, he alternates a few pairs of road shoes and a few pairs of trail shoes,” then joked again, “also some slick-looking running shoes to wear to church and out on hot dates!”

Shoes are the most important piece of equipment for runners.  It’s important to take care of and with them.  Keep them dry and clean.  Replace them when needed.  Remember, too, we are all “an experiment of one.”  We are all different.  As our experts all noted, “if a shoe works for you…..”