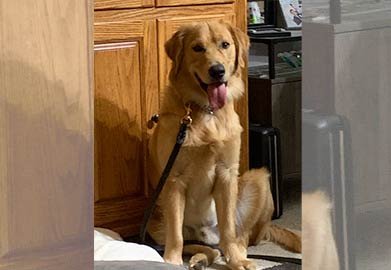 About a dozen years ago (likely longer!), I wrote one of my favorite columns.  My editor at the time titled it, “Ashley goes for a run with Grandpa in the jogger.”  Ashley is my granddaughter and I still well-remember that first run with her.  We walked some and ran some, with lots of smile and giggles.  Ashley doesn’t remember the first one, but she does recall we went out in the jogger together many times.

The last half mile or so of that first run was some unplanned speedwork.  Big, dark clouds moved in; they seemed to form from out of nowhere.  The first raindrops, big cold ones!, fell just as we pulled into the driveway.  They were followed by lightning and thunder.  Whew!  We just made it.

Although we no longer run together, Ashley and Grandpa love to take walks, always at her request.

I later also used the jogger with Cody, my second grandson, but not as often.  Almost as soon as he could walk without tottering, he much preferred hikes on the trails of the nearby state park.  He’s now at the age when running and walking aren’t appealing.  But he still will hop on a bike and ride with Grandpa.

Now, I’m running with someone new—Andy.  Andy is our eleven-month old Golden Retriever, about 65 pounds of strength and perpetual energy.  I had a couple of smaller dogs when I was growing up, but Karen and I never had a pet in the 46 years of our marriage.  Oh, sons Mike and Matt, and even our three grandkids, wanted a dog.  But we didn’t get one, not until earlier this year when Grandma caved in to Michael’s pleadings.

Michael is now off to college (Oakland University), but Andy has stayed with us as pets are not allowed in the dorm/apartment.  Guess who takes care of Andy, at least the outside part of it.

I’ve walked with Andy from the start.  First it was just in the yard.  That was followed by up and down the block, then a little longer through the neighborhood.  We extended our walks to a mile and a half loop through the woods around the back of the subdivision and even across the busy road to an adjacent neighborhood.  By mid-summer, he and I were going to nearby parks and schoolyards.  Relieved of his leash, he found Doggie Heaven!

Andy loves to run and I love to watch him, his short bursts a thing of beauty.  He tears here and there, long fluid strides with his ears pinned back.  Karen fears he’ll run away when I release him from his leash.  Nope, as hyper as he gets, he doesn’t.  If I turn a corner or get too far away, he comes sprinting back to me.  If I think he is too far away or see people or other dogs (Like typical Goldens, he is very friendly, even rambunctious, with folks.), a loud “Hey, yo!” brings him back—usually.  But, at his size and energy level, I do have to keep an alert eye open for other walkers.

It wasn’t long before I started to think about running with him.  It would be healthy, I figured, and our already close attachment could bond further.  Plus, it would be fun.  By September we started, but carefully and slowly.  Goldens, at least this one, are very active.  While Andy had run by himself, I wondered what to do to run with him.  I did some digging, reading books and articles.  I asked his veterinarian’s office and even his dog trainer (who spends as much time training Karen and me as she does Andy!) about it, too.

While Goldens are natural runners, even long-distance ones, care must be taken, especially for puppies.  Some dog handlers recommend not running with them until they are a year or even a year and a half.  There are concerns about stressing puppies’ paws and developing bones, even leading to joint disorders.  So, I was sure to take a great deal of care in starting with my new running buddy.

Following the instructions and suggestions from the reading and conversations I’ve had, Andy and I began slowly.  Toward the end of our typical daily walks, I introduced running.  He must have been puzzled.  Usually, any attempt to bolt while on the leash brings correction and admonition.  Not now.  He had to be thinking, “ What’s up with this?”  The first day we ran about a quarter of a mile, maybe a bit less.  It was difficult to hold him back.  We did that for several days.  Then we ran, walked, and ran—about half a mile total.  To be extra cautious, I alternated days.

Andy, like all Goldens, is built for long-distance running.  Some dog-runners have said they can run marathons.  I’m never going to try that, though.  The larger bodies, muscles, and stamina suggest those long and slow runs.  But, at least with Andy, his personality seems right now fitted more toward sprints, at least shorter bursts of all-out running.  That’s how he runs alone, off his leash.

But with me, well, I can’t keep up with his speed.  Even holding him back, our quarter mile intervals are “speed work.”  I have tried to keep our pace one of running, but not too fast, more for my sake than his.  And I’ve kept our distances to no more than a quarter mile at a time, although with walk breaks, we might do two or three repeats.  We always warm up with a walk of half a mile or more and cool down with a walk, too.  He loves his water bowl after and it’s a good reminder to me to hydrate, too.  I do watch to see if Andy is panting excessively or falling behind me.  So far that’s never been the case.  If anyone is lagging, it’s me.

Andy was “fixed” at the end of September and we took off a couple of weeks while he recuperated.  Now that he is fully healed, we are back at it.

More than one person who knows how much I enjoy running have asked if Andy and I run.  Now I can say, “Yes, we do!”  And, although I will continue to take it slowly and proceed with caution, I’m looking forward to longer runs with my new running buddy when he gets older.

I rec'd word last week that the 42nd Annual Big Bird Runs in Roseville are going virtual. The 10K, 4K, and 1 mile runs can be completed by runners, "on their own," any time from November 15 through November 22. Cost is $15 without tee shirt and $20 with. Upon registering, runners can submit their times by the 22nd to have them counted . A link will be provided.

More information can be had by calling 586-445 5480 during regular business hours or at this link, which includes two registration sites, http://rare-mi.org/special_events/special_events_overview/running_walking_events.php

The Big Bird is a special race for me, one of my favorites. I've run every Big Bird 10K since 1988 except one, when I was out of the state for a family wedding.