When the Marathon Was Run on Belle Isle 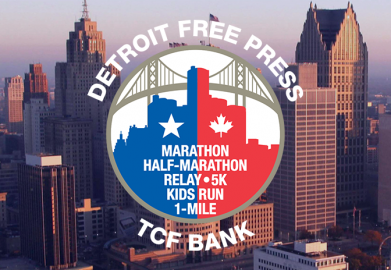 The Detroit Free Press International Marathon was to have celebrated the 43rd annual race on October 17th this year.  The race starts near downtown Detroit, crosses the Ambassador Bridge into Canada, continues through downtown Windsor, returning back to the United States through the Detroit-Windsor Tunnel, continuing through historic parts of the city to the finish.  It is the only race to offer two international border crossings.

However, the event is now actually in its 58th year and is the 8th oldest continually run marathon in the country.  The predecessor to the Free Press event was the First Motor City Marathon, hosted by the Michigan Road Runners Club (now the Motor City Striders) that took place on Belle Isle on Thanksgiving Day, November 28, 1963.  This event was held eight years before the first New York City Marathon and a good fifteen years before the first running boom.

That fall, I had just finished my first season of cross-country running at Wayne State University.  The racing distance was 4 miles and along with distance training runs we did a lot of speed work.  I had run as far as 10 miles only twice in my life.  The first was as a high school senior in the summer of 1960 and the second in the summer of this year.  I would soon realize that this was not an efficient way to train for a 26-mile race.

Our cross-country season had ended in early November and, with no races for months, two teammates and I asked our coach, Frank McBride, about the possibility that we could run the race.  He was one of the founders of the club that was conducting the race and was a former coach of the U.S. Army team in Europe in the mid 1950’s.

With his approval, we arrived on Belle Isle on a cloudy, 30-degree Thanksgiving morning dressed in shorts, long sleeve shirts and gloves ready to attempt the 4-3/4 laps around the island.  There were 24 who were entered in the race, four officials but no spectators, no water stations and no post race refreshments.  The race began and my teammates and I ran at a comfortable pace.  We were used to running much faster from our cross-country races and reached 5 miles in 29:35 feeling good.  At 10 miles, my friends had dropped slightly back and I crossed that point in one hour flat.  This was the farthest that I had ever run.  During the next 10 miles, my teammates dropped out and at about 18 miles I hit the proverbial wall.  I made it through 20 miles between 2:06 – 2:08, not thinking too well at this point and struggling to make it another 6 miles to the finish.  Walking across the finish line, I was 6th overall in 3:15:47.

Leading the pack was Bob Berger, of Lincoln Park in 2:32:50.  Behind him was Dan Lemay of Servite High School in 2:38:58 with third place taken by Dick Reamer, a former Catholic League Cross-Country Champion when he was at the University of Detroit High School, in 2:40:59.  These three were the only ones to be faster than 3 hours.  Of the 24 who started the race 11 of the 12 finishers were faster than 3:38 and the 12th and last was timed in 4:01:59.

The next year, 1964, of the 36 starters, 18 were high school students.  A total of 24 finished with 10 faster than 3 hours.  The weather was better than the year before, a sunny day with temperatures in the low 40’s.  The winner was Scotto Gonzales of the historic Boston Athletic Association in 2:44:46.

In 1965, a Canadian invasion began, and for the next nine years they won the race 6 times and finished second 3 times.  Ron Wallingford of the Hamilton Olympic Club led the field of 51 starters and 33 finishers to the finish in 2:21:27.  The year before he had placed 3rd at the Boston Marathon in 2:20:51 and he also twice established the fastest marathon times ever for a Canadian. He returned to this race three times in the next four years.  In 1967 he captured his second victory in 2:22:35 and in 1966 and 1969 he finished second.  Early in his running career he was the captain of the University of Michigan Track Team.

Finishing second on this day was Ron Warhurst in 2:30:09.  He was a member of the Western Michigan University’s cross-country teams that won consecutive NCAA Championships in 1964 and 1965 and went onto become the University of Michigan’s cross-country coach in 1974.  He held that position for more than 35 years and was also involved with the track team during this time.

The 2:20 barrier was cracked for the first time when Mike Hazilla, a sophomore at Western Michigan University, set a course record of 2:18:46 in 1966.  A year earlier he had finished third in the race in 2:34:33.  The first three finishers were the same as 1965, though in a different order.  Behind Hazilla, in second, was Ron Wallingford in 2:26:00 and three minutes back in third place was Ron Warhurst in 2:29:00.

Wallingford returned for the 1967 event and captured his second title in the race in 2:22:34.  In 31 degree temperature and a 10 mile an hour head wind he was followed by Art Coolidge, 2:28:24, who was running for the Boston Athletic Association as he sat out a year of ineligibility at Kent State University.

On June 2, 1968 an Olympic Trials qualifying race was held on Belle Isle in sunny, 70-degree weather.  The Detroit race was one of six regional events in the country.  Peter Buniak of the Toronto Olympic Club won in 2:23:57.  Art Coolidge of the B.A.A. finished second in 2:38:09 and was declared the winner because Buniak was not eligible for the U.S. Olympic Team.

The 1968 fall race saw the largest field of 89 runners to that date.  However, at the finish only thirty were able to complete the distance, the smallest number since the second year of the event.  Wayne Yerman of the North York Achilles Club won in 2:32:18, the third slowest victory ever for the races run on Belle Isle.  Contributing to the relatively slow times was a 15 mile per hour wind and driving rain throughout the entire race.  Finishing third overall was Lou Scott of Detroit in 2:44:14.  He represented the U.S. in the 5,000 meter run at the 1968 Summer Olympics.  Scott was the Michigan High School Mile Champion in 1962 and 1963 and also the State Cross-Country Champ in 1962.  His finish here snapped a string of 47 straight victories in local races.

In 1969, the date of the race was moved from Thanksgiving Day to the third Sunday in October to take better advantage of more favorable weather.  The move proved quite successful, as Jerome Drayton, formerly Peter Buniak, took advantage of overcast skies in upper 40-degree weather to record the largest margin of victory ever, a 15 minute lead over second place finisher Wallingford, who was running the sixth fastest time, 2:27:07, ever in Michigan to that time.  At the finish a North American record and the sixth fastest marathon in history had been set as Drayton cruised to a 2:12:00 clocking. He went on to win the star packed Fukuoka Marathon in Japan in cold weather and driving rain in December in 2:11:12.

Drayton returned to Detroit in 1970 and successfully defended his title in 2:23:08 as Canadians took the first five places.  Finishing second was Andy Boychuk, just over a minute behind Drayton in 2:24:14.  Boychuk had won the marathon at the 1967 Pan American Games and finished tenth at the 1968 Olympics.  The total field remained at the same consistent numbers as in past years, as 70 started and 46 finished in sunny, 69-degree weather.

After a four-year absence, Mike Hazilla returned to the race and the victor’s circle in 1971, when he ran the second fastest time on the course in a 2:16:21 effort.  Canadian Brian Armstrong finished second in 2:21:29.  Armstrong would go on to run many marathons around the world with a best of 2:13:39 at the 1973 Canadian Championships.  Again, warm weather was the order of the day with temperatures in the upper 50’s, but overcast skies helped the 67 finishers somewhat.

The Toronto Olympic Club lived up to their reputations on a rainy day in 1972.  Team members swept the first four places, led by Brian Armstrong who clocked 2:18:46, improving by over 2 ½ minutes over his second place finish a year earlier.  Finishing second in 2:21:19 was Peter Lever who had finished 4th in both the 1970 and 1971 races.

There were two marathon races held in 1973 and 1974.  A March event was sponsored by the Detroit News in conjunction with the annual NCAA Indoor Track and Field Championship held at Cobo Hall.  In cloudy, damp 40-degree weather, Norm Patenaude of the Laurentian Track Club won in 2:24:05.  In the 1973 October race, 110 struggled to the finish.  This was the first marathon race in the state to have over a hundred finishers.  First across the line was Duane Spitz in 2:23:05.  In the March race, Spitz finished second to Patenaude by only fourteen seconds.

The March race of 1974 was run in sunny, high 30-degree weather, with Paul Pearson of the Toronto Olympic Club, who had finished second to Spitz in October, winning in 2:29:02. Despite the popularity of the March race, the Detroit News decided to drop sponsorship of the event so they could better concentrate on the indoor meet which drew large crowds.

In October, Ed Griffis battled 60-degree temperatures on a sunny day to win in 2:25:29.  This was the first year that women participated in the event, with eight entrants and six finishers.  Sue Mallery, the first woman, finished fifty-fourth out of 149 starters in 3:09:47 and registered a whopping 25-minute margin over the second woman.

The field neared 200 starters in 1975, as 151 finished in near ideal 40-50 degree weather.  Bill Stewart set a 30-39 age group record, as he raced to a 2:25:25 victory.  In 1982, he set a Master’s mile record of 4:11 at age 40.  He also set American Master records in the 15K and 25K.  Seventeen year old Ella Willis of Detroit finished 90th in 3:13:51. Her margin over the second woman was only two minutes, as competition in the women’s division improved considerably.  Willis went on to win the Detroit Free Press International Marathon four times, setting a women’s record and eventually being named the greatest African-American distance runner of all time.  Finishing second for women in both the 1974 and 1975 races was Jeanne Bocci.  She went on to run 89 marathons, set a 1500m race walking record and was inducted into the USATF Masters Hall of Fame.

In 1976, the race was designated as the Road Runners Club of America’s North Region Championship.  The day was ideal for the 250 entrants, as temperatures hovered in the 45-50 degree range in a misty atmosphere.  When the watch was stopped for the winner, Gordon Minty, had run the third fastest time ever on the course in 2:17:49.  He was a four-time All-American at Eastern Michigan University and set a world indoor record in the three mile.  In the woman’s division, Alexa Kraft just missed breaking the three-hour barrier as she clocked 3:00:41 to establish the women’s state record.  Later, as a mother in her 30’s, she was an All-American in track and cross-country at Macomb Community College.

The 15th and last Motor City Marathon on Belle Isle was held in 1977. The field had nearly doubled to 428 entrants and was among the ten or twelve  largest marathons in the country that year.  The race numbers for all races including the marathon were just beginning to increase around the country.  On a windy day in the low 40’s, Bob McOmber placed first in 2:23:37.  In 82nd place was Ann Forshee, who broke the year old women’s record with a time of 2:55:59.  The performance placed her in the all-time top 25 performances by U.S. women at that time.