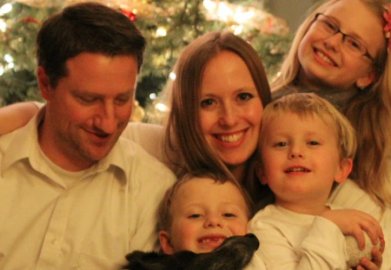 Laura Doran had a late start to her running life, but is intent on making up for that in more ways than one.  Because she wrote about it in her blog, she knows the exact date she began her love affair with running—October 12, 2017.

The 44-year old elementary school teacher concedes, “I hated running.”  Oh, she’s always been involved in athletics.  Growing up, she loved to play softball, travel ball and in high school.  In fact, she started all four years at second base for her high school softball team.  And she played tennis in high school.  To her in those years, “running was my sports punishment.”

She and her husband Jeff have four children at home and, she sadly added, “two losses.”  She recalled, “In my 20s, I started walking regularly to lose weight after all my pregnancies.”  She also did pilates.  “I can walk fast,” adding a quip, “about as fast as my dad [Bob] runs.”

Doran admitted, “I started running simply because it was raining.” On her Columbus Day 2017 walk, “It started to rain fairly hard, so I started to jog home.  Well, I did a whole three miles straight and loved it!  I was shocked.”

“I immediately told my dad.”  Bob has been running for almost fifty years.  “He was so proud of me that the next day I thought, ‘I wonder if I could do that again.’  And I did!  After that, I was hooked.”
Racing soon, very soon, entered the picture.  “I did my first 5K on that November 11 and I’ve been running nearly every day since.”

Doran said simply, “I continue [to run] because I can.”  She added, “…because my dad does.”  In tribute, she noted, “He’s an inspiration to me.  I love that he just gets out there and does it.”  She also listens to Dad’s advice and tips.  “He told me I need to build in a rest day now and then.  So, on those days, I’ll walk three to five miles.”

But she also cited the many benefits she gets from running.  “I run because it feels good.  It’s time on my feet away from my responsibilities—home, Mom, teaching.  I feel very accomplished and proud that I can do this.  Even though I caught the [running] bug late, I caught it!”?    Mostly she runs solo.  “No one I know well really runs.”  She has run with her dad.  Son Joey is on the high school cross country team, but “my kids won’t run with me.  I did get Jeff to do a run/walk with me.  He said he liked it and that he’d do it again.  He said he’d run a mile or two, but we stretched it into a 5K.”

But Doran really doesn’t run by herself.  She has been using the Charge Running app since December.  “It makes me feel like I’m not running alone.”  The app includes different coaches.  “I have a coach talking in my ear [buds] and I can talk to him or her via a ‘chat’ feature.  They can see your pace, mileage, and cadence and, if your watch connects to that, your heart rate.”

That ‘chat’ button allows her to “talk with other runners,” too, when she’s out there.  “They play music and you feel like you’re running with a group.  You get to know each other.  It’s a super supportive group.  I met a good running friend in Illinois!  She just sent me a pair of shoes.”

The companionship helps the tough running in her neighborhood.  “It’s really hilly.  My five-mile route is a 192-foot elevation gain.”  But she still “hates hills.”

The coaches on Charge helped her set up a training schedule.  “That was the first I’d heard of different workouts.  I didn’t know they existed.”  Since then she has included tempo runs.  “They scared me at first, but I really like them.”

Through Charge, she has come to enjoy the Jeff Galloway run/walk method, “especially for my longer runs.  He’s been on the mic a lot in my app and I’m sold.”  Doran recently used the Galloway method to run a half marathon, with a PR!

Her favorite racing distance is 5K, but she’s run longer races, too.  “I did Bayshore [Traverse City], both the half [marathon] and 10K, and the Detroit Turkey Trot, both the 5K and 10K.”  And she’s run a number of local races.  “I did some virtual runs before the virus, which is how I found the Charge Running app.”

Like many racing runners, she’s “bummed” that “everything is virtual.  It’s not the same.”  But she has discovered yet another way to engage in running.

“I’m officially a race director!” she wrote.  In memory of her son Andrew, who she lost, she’s directing the first “Because of Andrew Virtual 5K Run/Walk.”  It is on September 15, Andrew’s (and twin Joey’s) birthday.

“September 15 has always been a day mixed with happy and sad tears, but to make those tears more happy, we asking you to get moving and walk or run a 5K ‘Because of Andrew.’”

Charge Running will provide the platform.  Participants opting to use Charge can run or walk live with others beginning at 6:30 PM EDT on the 15th.  The app can be downloaded at no cost.  But having the Charge app isn’t necessary.  The 5K can be run or walked any time through Tuesday, September 15, wherever you are, “inside or outside, fast or slow.  We just hope you’ll get moving for a great cause.”

There is an entry fee.  Doran said, “All proceeds will benefit the Riley Katheryn Foundation which is dedicated to increasing awareness of infant death.  [It] also provides financial support relating to funeral and burial expenses to families of babies who have died.”

You can find more information, including registration, how to contribute, and more at www.runsignup.com/Race/MI/Anycity/BecauseofAndrew.   It’s a wonderful reason to “get moving for a great cause.”