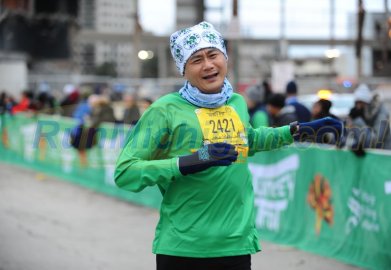 This month marks my 45th year of running.  That sure seems like a long time, although I know quite a few folks who’ve been at it longer than I have.

It’s easy for me to remember my running anniversary, at least the year.  Last December, Karen and I celebrated our 45th wedding anniversary.  Seven months later, this newlywed began his long running odyssey.  That my first unremarkable run was, well, so unremarkable that I recall it so clearly is a surprise.

At the time, Karen arrived home from her job a few hours later than I did from taking my summer graduate classes.  I had some time to kill that July afternoon, a bright sunny one, and for some now unremembered reason, I decided to go for a run.

OK, I suppose it was more than just finding something to do.  I had found about forty pounds since my college playing weight four years earlier.  Perhaps I thought that running would help me lose them.

Of course, I had run before, but almost exclusively chasing, dribbling, or carrying a ball of some sort.  And after rugby practice in college, for conditioning, we’d go on half hour jogs through the campus bird sanctuary.  So, running was still, for me then, ball-related.  Running for its own enjoyment and benefits was still far off.

That first mid-week July run in 1975?  What shorts and tee shirt I wore have long been forgotten.  But I do remember, clearly, that I wore a pair of red basketball shoes, the old Bata Bullets brand.  What did I know about running?  And, to time myself, I carried an old Davy Crockett wristwatch, possibly as much as a twenty-year old Christmas present.  My wrist was too big to wear it.  I don’t know why I opted to run by time rather than distance.

My goal was to run out for eleven minutes and, I figured, back for another eleven—a twenty-two minute-run.  I guess I assumed, wrongly I’m now convinced, I’d be running about a seven-minute pace, so would get in about three miles.  Ha Ha Ha!  What did I know about running?

In the mid-afternoon heat, I took off behind our then apartment, through a wooded area, on a foot path.  Hmmm.  I guess that was a trail run before I knew what trail running was.

That first run apparently didn’t kill me, but I did sit on the front stoop for a while, long enough for Karen to pull in from work.  I must have been in at least some disheveled state since she asked, with some concern, “What did you do?”  I wasn’t sure, but I explained and, although I have no recollection of my second, third, fourth…runs, I’m still at it.

Then, I was coaching high school football and baseball (ball sports!), along with helping out with a couple of winter sports, too.  The only time to run was early in the morning, very early in the morning.   At first two of my coaching buddies joined me at 5:30 AM (!) each day for about a half hour run followed by a quick workout in what served as the weight room.  (It was a cleared out old storage closet.)  Two coaches/running buddies became one, but the routine continued for about eleven or twelve years or so, all seasons of the year.  But then my pre-dawn runs became solo.

When Mike and Matt came along, Karen woke, fed, and dressed them.  She took them to the sitter and, as they got older, to school.  At the end of the day, since I had already run, I picked them up, probably played a little ball or rode bikes with them, and prepared dinner.  Not until both boys were in school, the latest tier, did I finally change to afternoon running, still able to get in a run before their bus(es) arrived.

It took eleven years before I thought about road racing.  The fact was, I didn’t realize there was such as thing as a running road race.  A local runner introduced me to the concept and in 1986, I entered my first race—the West Bloomfield Half Marathon!  A half marathon for a first race?  Yep.  What did I know other than I found I really liked to run.  The race went well enough and I enjoyed it so much I entered another race a few weeks later—an eighteen-miler at the Chai Runs, also in West Bloomfield.  Again, for the umpteenth time, what did I know?

It didn’t take too long before my competitive streak kicked in.  I began to take racing a bit more seriously, but only a bit.  Racing was a challenge within myself.  I ran against me, mostly against my times at previous races of the same distances.  I know it must sound weird to many people, but I remember very few of my PRs.  I think I can narrow some of them, but only some, down to the minutes, but not the seconds.

I did set several goals.  One was to run a race faster than a six-minute pace and I did that at several distances.  I can’t recall the specific times, though.  For a few years I aimed to run at least one race every month, just for fun.

Inspired by the West Bloomfield and Chai runs, I decided to run the Free Press Marathon in ’86.  Since I have finished another eleven or twelve, but I’m not certain exactly how many.  And I can’t tell my PR because I really don’t know it.  I do recall, though, that for many years I was disappointed in not breaking three hours, although I think I came with seconds of doing so a few times.

Among the marathon highlights were two Boston Marathons, including the 100th running of it. Those were extra special.  Not only were they “Boston,” but they allowed me to return to New England, my home away from home where I went to college.  I haven’t done a marathon in maybe twenty years, but I can’t cite the last year.  And there are no marathon plans in my future, none.  But I enjoyed them a great deal, the training as much as the actual events.

For years I talked of adding biking to my running.  Finally, about fifteen years ago, I began to bike, casually.  I call it “biking” for that reason.  I’m far too casual for “cycling.”  Once the weather warms enough, in late March or early April, I haul out my same fifteen-year old bike and ride until the snow flies.  I’ve come to enjoy riding a lot, but not as much as running.

When I turned 70, I did something I never really thought I’d do.  Walking was added to my weekly regimen.  I now walk at least one day a week, depending on my fatigue, and don’t at all hesitate to mix walking with running on other days.  Walking has grown on me, but I still prefer running.

One thing I’ve toyed with is snow shoeing.  Like biking initially, I think that is just talk, at least right now.  But maybe someday……

Mostly, after my coaching buddy stopped, I’ve run by myself.  I enjoy being alone, with my emotions and thoughts.  But I have set aside some running with others, even with a group of five or six for a lot of years on Sunday mornings.  It was good to get out there with others.  The banter and camaraderie were fun.  For almost twenty years, until he was sidelined by arthritis, I was a guide for a blind runner.   That was special.

Also special are my Sunday runs with my training partner of almost thirty years.  We meet up and solve the world’s problems, share family stories, and more.  Those Sunday runs are among my best ones of the week.   So I have the best of running worlds, solo runs which I love and running with my buddy, which I also enjoy.

After all these years, many people ask, “Are you still running?” and follow that up with “Why?”  I know “why.”  I am aware of all the benefits running provides—the physical and mental aspects, weight management, quality of life, increased longevity, and more.  But the reality is I run for one reason, the same one that led me to continue 45 years ago.  I like it.  It’s that simple for me.