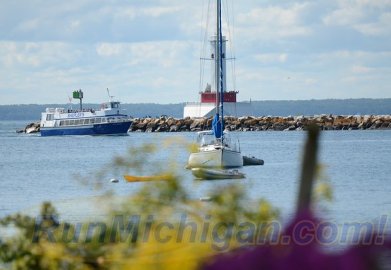 With every road race in the state canceled or postponed due to the executive orders from the governor, many Michigan runners have been disappointed and frustrated. They had trained hard through the always tough Michigan winter. They were looking forward to their events, to see old friends and experience the camaraderie of racing, to test their levels of fitness, and, of course, to race.

Jillian Peck was one of those frustrated runners. “I was training for the Rock CF half marathon, the Spring Robin 10K, and the Bayshore Half,” she lamented. “I kept running at first, but when the cancellations started rolling in, I started falling into a dark place and needed some motivation.” So, she decided to do something about it.

“Having run the Great Lakes Relay [now the Outback Michigan Relay] for a few years and finding an old route book while cleaning a room got my head turning.” She came up with an idea of setting up “a virtual Great Lakes Relay-type event.” Peck explained. “During a Saturday night Zoom gathering with my running friends, I tossed the idea out [to them]. We had all run the GLR and knew the event, five or six assigned legs ranging from two to ten miles each.” Her suggestion caught on immediately. “Most of them were interested. So we posted it on our 501 Running Club Facebook page.”

But there was a surprise for her. “Setting up a virtual GLR-type event ended up being significantly more complicated than I had anticipated.” She called in “the engineers and their spreadsheets.” They created formulas for ranking the runners, handicaps, and more. The virtual relay was about to take off!

The plan was the brainchild of Peck, of course. She admitted, though, “I did not want to be a captain. I nominated three guys and they all said yes. Soon, one of the captains dropped out, so Peck “stepped in” with Al Johnson and Axel Demuth to lead the teams.

Three teams of ten runners each were selected. Initially stuck at twenty-seven, Johnson recruited his daughter “and a couple of her friends down in Nashville” to round out the thirty runners. It was now an interstate virtual event.

The captains met with a Zoom session and attempted to balance the teams. They considered several factors, including runners’ “average paces for mid-length runs of three to six miles,” ages, and “equal male/female splits.” But Peck noted, “There were significantly more women than men on our teams.”

Johnson noted, “This was just to get people out the door and with social distancing in effect, we knew we wouldn’t be able to get runners to go to five or six specific routes.” This, of course, differed from the actual Great Lakes Relay. Runners were able to choose their own places to run. They were assigned legs of specific distances, but could do them at any time and on any surfaces they wanted.

Peck said, “Some runners ran their usual routes around home or at Kensington [Metropark]. Some ran on treadmills. Some of us even ran on trails.”

Runners were permitted to do their legs whenever they wanted between Saturday, May 2 nd and Sunday, May 17th. Johnson said, “We figured three weekends would be plenty. Some of the runners, like Peck, finished all their assigned legs in a week.

Captains assigned legs to each of their teammates. The only “rule” was that a leg had to be run entirely within one workout. Runners could run their assigned legs in any order they chose. Some ran two legs in a day. Johnson said runners could not break up their legs; that is, “They couldn’t do a mile in the morning, another at lunch, and another in the evening and call it a three-mile leg.” But multiple legs could be done in a single run. For instance, a runner might run ten miles, calculate his times for the first four miles and the second six miles and submit them to count as four- and six-mile legs.

Runners checked in with their captains, reporting dates, distances, and times. Individual information was added to the spreadsheets as team scores were established. Runners could check the spreadsheets for results and standings, but to avoid confusion only team captains had editing access.

Johnson added that, “In the past when we [the 501 Runners] had more than one GLR ream, there was a cute gnome statue that traveled between [the 501] victors.” Slyly, Peck noted, “There is a story with that one!”

Johnson was very pleased with the outcome. “I’m pretty sure the race had the desired effect of giving people motivation to run longer and faster than they would have otherwise. I received several comments from my team that they enjoyed it and are looking for what’s next.”

Peck is ahead of them again. “The 501 Running Club is now doing a ‘streak’ for the month of June.” Members are asked to “get moving for 501 minutes.” They can run, walk, bike, swim, or lift weights to earn points. “Raffle tickets will be given for awards at the end of the month.”

She said, “The official Michigan Outlook Relay canceled its July event in May. They communicated their idea of doing a virtual event.” She joked, “Ha! They were a little late coming to the party!”

Congratulations to Jillian Peck and the 501 Running Club!