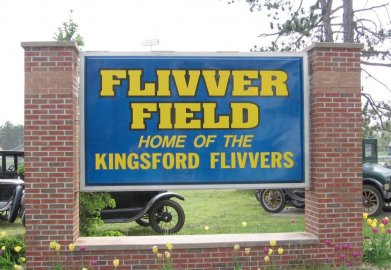 About a year ago, I explored some of Michigan’s unique high school mascots and nicknames, just for fun.   This month we can wrap up with some other distinctive nicknames and mascots from the state’s high schools, again, just for fun.  Remember that these often tie the schools more closely to their respective communities, their history and heritage.

The Upper Peninsula is home to a number of unique nicknames.  In 1919, to procure a reliable source of hardwood for wheels, floorboards, and body frames for the Model T, Henry Ford bought more than 300,000 acres of land near Iron Mountain, close to the Wisconsin border.  He employed Albert Kahn to design a factory to produce the wooden parts near the site.  Al Unger, athletic director at Kingsford High School, said “With this, the town exploded in population.  The plant employed 7,000 people and Ford Motor Company built housing and a high school.”  Opening in 1925, Unger said “The name ‘’Flivver” started getting kicked around” as a mascot.  “Flivver” was a nickname attached to the Model T.  The origin of the term flivver is unknown, but it was used in the early 20th Century to denote a cheap car.  Teams at Kingsford became the Flivvers and, although the factory closed in 1951, it’s still the Kingsford Flivvers.

More than 80 years later, Unger said, “Someone asked, ‘Why don’t we have a car?’” a Model T, a flivver, that is.  The school district worked on it, locating a 1923 Model T on the Internet and, with the help of local donations, purchasing the Model T.  “It needed some work,” Unger recalled.  Contributions came in for the flivver’s restoration, which was completed by Unger’s uncle, “a jack of all trades.”   Painted in the school colors, blue and gold, on October 18, 2017 the restored flivver was dedicated at the high school and remains on display on the middle school campus.

By the way, this spring and summer if you grill with Kingsford Charcoal, you’ve made an unknown connection with the “Flivvers.”  The hardwoods used to help produce the Flivvers left a lot of scrap—tree stumps, branches and limbs, and sawdust.  Ford saw another opportunity to make money.  With the help of his good friend Thomas Edison and the work of a University of Oregon chemist, Orin Stafford, the charcoal briquette came into being.   Kingsford remains the number one producer of charcoal in the US.

A 1986 ESPN list of the top ten nicknames/mascots for American high school sports teams included the Nimrods of Watersmeet.  Often thought of as a derisive term, most people think of a nimrod as “an inept, dim-witted, or stupid person.”  Its original meaning is far different.  Bibilically, in the Table of Nations, nimrod was “a great hunter before the Lord.”  For Watersmeet, located in the western environs of the Upper Peninsula, hunting has been an essential activity.

George Peterson III, current principal and athletic director at Watersmeet High and superintendent of the district’s schools, is also “a proud 1979 graduate of Watersmeet.”  He explained, “We’re located in the middle of the Ottawa National Forest.  We hunt bears, deer, grouse, and wild turkeys.”  In light of that, he said, “We just figured it,” the name Nimrods, “was an honor.  It wasn’t a derogatory remark.”

He referred to the Biblical origins, too.  When some folks make fun of Nimrods, Peterson chuckled as he said, “I say to them, ‘You don’t know the Bible, do you?’”

Since the ESPN and subsequent USA Today publicity, “It’s been quite a ride.”  The Nimrods weren’t just the toast of the UP or all of Michigan, but the US.  Some Nimrods were invited to the Tonight Show with Jay Leno.  Following that, Nimrod merchandise became a hot commodity.  Peterson recalled that the first two and a half years after the Tonight appearance, the school store raised “about $500,000.  It’s not as much now, but the money has gone to help with student needs, such as scholarships and class trips to Europe.”

The Gwinn High School Modeltowners were so named because of a social experiment of sorts.  When the town of Gwinn was built by the Cleveland Cliffs Iron Company, its plans were thought to be a model for such future communities.  Rob Soyring, current athletic director and dean of students at the high school, forwarded an article by local historian Richard Wills which referred to “the model town.”

After a survey and the clearing of land for the town began in 1906, the model included many benefits for the workers and their families.  Among other things, the town was planned with green spaces and boulevards, a hospital with company doctors and visiting nurses, ad a water and sewage system.  A landmark was “The Clubhouse,” which housed a library, gymnasium, bowling alley, swimming pool, and shower facility.  Also, the company built a high school.  “Soon thereafter, it’s athletic teams became known as the Modeltowners.”

“Bath City, USA.”  That is the title Mount Clemens has borne since the last third of the 19th Century due to the mineral waters discovered there.  Although all but one of the original 34 bath houses have been closed for more than 40 years, the name endures with the athletic teams of Mount Clemens High School, called the Battling Bathers.

In its heyday, the city attracted thousands of tourists who soothed themselves in the famous baths, the first of which opened in 1873.  Kim Parr of the Crocker House Museum, said, “Mount Clemens was world renowned for its mineral baths.”  People claimed to be cured of myriad ailments.  Visitors included Henry Ford, Mae West, Babe Ruth, William Randolph Hearst, William Jennings Bryan, and Helena Rubenstein, as well as European royalty.

The mascot Battling Bathers seems to have originated in the early 1920s.  In losing to the then top-ranked football team in the state, Bay City, the winning coach complimented the Mount Clemens players.  “Those Battling Bathers put up quite a fight.”  The name remains.

A 2015 MLive poll asked respondents to choose the “coolest high school mascot.”  The winner was the Ann Arbor Huron River Rats, a name shared with Black River High School.  River Rats?  Huron opened in 1969, the second Ann Arbor high school.  The story behind River Rats is actually stories and hitting upon the right one isn’t easy.

Some suggest that in constructing the new building, workers were inundated with rats from the nearby Huron River.  Another tale revolves around rival Ann Arbor Pioneer students.  They derisively referred to the new high school’s attendees as “sewer rats.”  Huron students, not insulted, changed it to River Rats and embraced the name.  Yet a third version involves roadkill, a muskrat, that was left in the school locker room as a prank.  Still a fourth refers to the early years of overcrowding at the school, so crowded that the rats were said to have fled the building, too.

Of course, River Rats wasn’t looked upon fondly by the school administration and Huron opened without an official nickname, despite it being the overwhelming winner of a student election—as a write-in candidate.  Perseverance won out and River Rats they are.  The athletic director still holds a raffle each Friday to determine which student gets the honor of wearing the mascot costume to ball games.

There is a rich history behind many Michigan high school nicknames/mascots.  In many instances, they tie the schools in more closely with the local communities and their heritages.  And there are still the Dreadnaughts, the Corsairs, the Saddlelites, the Jungaleers, the Chemics……