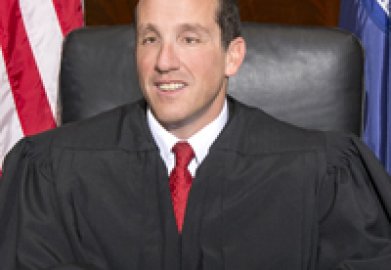 Pursuant to last month’s column, I “caught up with” Michigan State Supreme Court Justice Richard Bernstein at the end of February.  At the time he was 16,000 miles away.  Yes, that’s sixteen thousand miles away—in India.  After we both marveled at modern technology that allowed us to talk with each other from opposite sides of the world as if we were right across the street, we got down to talking about his running and his week-long trip to India.

Yes, Justice Bernstein is still running.  “I try to do seven miles a day, often on the treadmill, even with the pain.”  That “pain” is a result of a terrible accident he had in 2012.  While running in Central Park in New York City, he was hit by a bicyclist.  Recovery involved a lengthy hospital stay and several surgeries.

“There are still problems with the accident.  I have tremendous pain in my hips and pelvis.  Running is a challenge.  It hurts a lot.”  But, he allowed, “You learn to live with it.  It’s always going to be there.  You learn to deal with it and I’m not going to let it stop me from doing what I want to do.”

And that’s what we’ve come to expect from the blind runner.  He graduated from the University of Michigan and the Northwestern University School of Law.  He practiced law and was elected to the state’s highest court in November 2014.

Bernstein’s self-prescribed “challenge” is not merely running; it’s running marathons, a lot of them.  “I really try to do one marathon a year.  I’m up to twenty-four marathons.”  He admits, “The last seven have been the most challenging, the most difficult.”  Along the way, he also completed a full Ironman.

“I don’t want to stop running marathons.  They’ve become a part of me.”  He surmised, “If I stop, I might stop doing other things I like, stop doing other activities.  I can’t let that happen.”

Last year the Justice took his “challenge” a bit farther.  “I did two marathons in 2019, the Free Press [in Detroit] and New York City.”  They were two weeks apart.  “It was not easy,” although New York is one he does every year.

By adding the Free Press, he said, “I tried to push myself a little bit.”  As difficult as they were, “They made for a great fall.  It was more enjoyable, even more complete.”

Of Detroit, he enthused, “I love the Free Press.  It’s the kindest, the warmest [marathon], with the nicest people.   And it’s my hometown marathon.  You have people you know.”

He analyzed his Free Press.  “I like the Windsor part of it, the freighters blowing their horns, just hearing the freighters.  I just love it!”  Leaving Windsor on the return to Detroit, he said, “The [Detroit-Windsor] tunnel is cool.”

Bernstein noted, “The Belle Isle portion is the most difficult for me.  There aren’t a lot of people to cheer.  And there’s always a wind.  At eighteen miles, you’re wiped out and hit the wall.”  But not enough to prevent recovery for the New York City Marathon.

His marathons serve as a calendar of sorts for him.  “I use them to mark my year.  I know the fall is marathon season.  It allows me to feel like I’ve successfully completed the year.”  He laughed, “Get through the marathon and it’s the holidays.  You can eat whatever you want!  I’ve done my work and I can enjoy Thanksgiving and all the food.”

Despite his marathon successes, Bernstein is modest, even self-effacing about his running.  It’s baffling that one who has run two dozen marathons can describe himself as “a terrible runner.”  He said, “I’m terribly slow, as slow as a runner can be.”  Citing his NYC Marathon, he claimed, “I’m tortoise-like.”  He still recognizes, though, “I’m still out there, still participating.  I keep pushing myself to stay in the game.”

Still in India when we spoke, he lamented, “I can’t really run due to the poor air quality.  The air pollution is horrendous.  It you sit outside, you get covered in dust and dirt.  If you want to run, you have to run inside.”

The purpose of his visit to the Subcontinent was to address some of the major problems there.  He spoke at schools and orphanages, trying to use his blindness to teach lessons to children, that people can overcome their circumstances and strive for better lives, to escape the lives dictated to them by the caste system.

“I have traveled all over the world.  This is one of the most difficult places I’ve seen.  Although some people live in palaces,” he noted, “the poverty is beyond anything I could describe to you.”

Besides the air pollution, there’s often no sewage disposal.  He also pointed to the congestion, the enormous masses of people.  “There are five times as many people in a country one-fourth the size of the United States.”  He visited the “slum” depicted in the movie Slum Dog Millionaire.    “Slums as referred to by the Indians, even the government, is actually the term.  It’s not slang.”

“The Invisibles” refers to many of the children there.  Some are abandoned by families unable to provide food for them.  “They,” the children, “live, not in huts, but in trash pits, trash dumps.”

The government doesn’t do much to help.  That is left to “NGOs,” which he explained were “Non-Government Organizations” such as charities and philanthropists.  The NGOs try to “provide kids with lunches, to get them to get out of the trash.”  Then they might “teach the children how to bathe and brush their teeth, just basic hygiene.”  Reading and writing, he noted, “are secondary.”

He also described the “competition” that exists for many of these kids.  Other people attempt to exploit them, for instance, forcing them into prostitution with lures of food and shelter.

Bernstein approached his visit and work with the children with questions of himself.  “How can a Detroiter connect with the Indians?  How can my life connect with them?”  Complicating matters was his blindness.  “A common belief,” he explained, “is that blindness [and other disabilities] is due to doing something in a past life.  You’ve done something really evil or something really harmful [in that previous life].  You deserve to be blind.  You merit your disability.”  Such attitudes are embedded in “old customs, in prevalent belief systems.”

But he used his lack of vision to teach his lessons.  In India, he pointed out, “There are no blind judges in a population of 1.4 billion people.  If you are like me, blind, you’re primarily ostracized with no future.”

He discovered that “running matters.  Running is a universal binder.  If you can run, it changes perceptions of what you can do.”  It helped him “to connect, to relate to the children.  It was effective in creating some connection.  They won’t relate to a judge, to a lawyer.  It’s the running.  That gets kids’ attention.”  At the least, Bernstein found, “Talking about running opened the conversation.”

The time he spent in India will have “a huge impact on my life.”  So does running.  “I don’t want to quit.   I want to be out there, still doing it, participating.”

In 2020, Justice Bernstein hopes “to maintain a certain level of consistency, not do anything groundbreaking.  I just want to be a consistent runner for the duration.”  His plans include continuing to run one marathon a year.   “I think my body can handle that.  I don’t want a year when I don’t do a marathon.  If I have a year where I stop doing a marathon, I might stop doing marathons.  I can’t let that happen.”