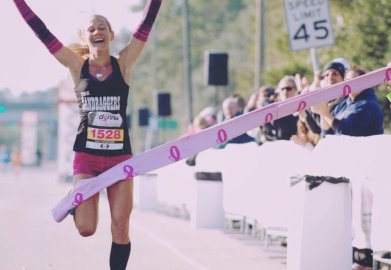 “Fifteen, twenty years ago, I was a different person than I am today.”  So revealed Melissa Broyles, who has become one of the top female runners and racers in the state.

Last summer, I profiled Ryan Johns, a former notable junior high and high school runner who, after a few years’ hiatus after college, returned to high level racing competition in his 30s.  Broyles and Johns are sister and brother. But each followed a very different path to running enjoyment and racing success as adults.

The 42-year old Broyles is the business development manager for Athletico Physical Therapy, which covers Metropolitan Detroit physical therapy clinics.  She’s worked in the health care field for twenty years, specifically in physical therapy for the past fifteen.

Early in her life, Broyles admitted, “I never enjoyed running and didn’t consider myself a ‘runner.’  I never got into running as a sport and never ran more than a mile or two.”

She finally began running when she was 31 years old, “nine months after my second child was born.”  Her initial goal was “to lose my ‘baby weight’ and try to get into shape” after the births of her two children, eighteen months apart.

Broyles mused, “The interesting part of my journey is that my younger brother, Ryan Johns, discovered a passion for running in middle school and became a very successful cross country and track athlete at Lakeland High School,” where he was a key cog on a state championship cross country team.  “I remember him asking me to run with him in our neighborhood. But I would complain and make excuses [not to run].”

“I can’t really explain why I never tried running when I was younger.  I often wonder what ‘could have been” if I had discovered the runner within me” back then.

It was late 2009, she recalled, “when my love of running began.”  Son Cullen [now twelve years old] and daughter Jillian [ten] had been born.  “I was trying to get into shape.”

Her husband Jim suggested she register for a Thanksgiving Day Turkey Trot for the Homeless, a four-mile charity run.  Previously, as much as Jim enjoyed running, he, like Ryan, never was able to convince Melissa to go for a run with him.  Now, though, Broyles saw this race as motivation. “So, I decided to do something that I’d never done before and signed up for the run!”  Yikes! It was a four-mile run! Jim was as excited as she was.

Her husband, a native of Akron, Ohio, was a runner.  He and Melissa met in Chicago. “When we met, he was training for his first marathon, Chicago.  Back then, I had no idea what a marathon really entailed.”

Prior to that first Turkey Trot, she ran “only a few times.  I remember it was hard to breathe and I could run for only a few minutes at a time before feeling winded.”  For the race, she decided her “goal was just to finish” and that, if necessary, “would walk/jog” to do that.  Complicating matters was that the race course included a lot of hills and “was known as challenging.”

She recalled race day.  “I remember walking up the hills and wanting to give up.  My whole body hurt.” She chuckled, “I couldn’t believe people actually enjoyed running.”

To her initial surprise, Broyles crossed the finish line with “sense of accomplishment like I had never felt before.  I was excited to say I did my fist race!” The “hurt” she had felt faded pretty quickly. “A little while after I finished, I remember a new and exhilarating feeling throughout my body.”  She had “discovered the runner within me.”

After the Turkey Trot she looked for her time, her pace, and where she had placed.  Her pace was 10:20 a mile “and,” she told herself, “I walked up every hill. I was so slow.”  But she thought, “I can do better if I try harder.”

That first race was an epiphany, a realization.  “From this point on,” she noted, “my life as I knew it was about to change.  This one event kicked off my running journey, one that would be filled with thousands of miles and new beginnings.”

Not long after the Turkey Trot, Broyles invested in a treadmill.  During the cold winter months of 2010 she started to run more, “more miles each day.”  Nobody coached her and she followed no real training plan. She just ran and discovered “running was starting to feel easier.”

As important as the physical aspect, she experienced a change in her attitude.  “As the weeks went on, I started to look forward to each run. Running became my personal time for myself and an outlet to relieve stress.  It was my time to let go of the daily anxieties related to work and parenting. I never thought running could bring me happiness and make me feel so alive!”  She had traveled quite a distance from “I couldn’t believe people actually enjoyed running.”

A few months into her running journey (She often calls her running experiences “her journey.”), she entered her second race, The Passion for Life 5K in Walled Lake.  This event sparked yet another epiphany, another new facet to Broyles’ running. “This race is the one that opened the door to my competitive side,” a side she apparently didn’t know she had.  “It helped me discover that I could be a fast runner if I worked hard enough at it.”

“After crossing the finish line, there was an awards ceremony for age-group winners of the race.”  The ceremony brought a surprise. “I had no idea that I would end up winning first place in my then age-group, ages 30-34.  When the race director called my name,” she remembered, “I was in complete shock! How could I have won? I’d never won anything competitive in my whole life.” She chuckled, “It’s funny.  I still have the picture someone took of me holding a first-place envelope and award.” Her competitive nature was unleashed. “Winning my age-group bracket gave me a new motivation to become a runner,” and a racer.  In fact, she returned to The Passion for Life 5K to win the outright female title.

In February, we’ll continue with Melissa Broyles’ running story, how The Passion for Life 5K was a springboard into a new chapter of Broyles’ running and racing life.  It would lead to a number of first place and other top finishes as well as to the Boston Marathon.