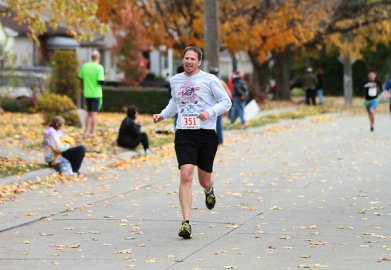 Roseville (November 10)— Race director Tony Lipinski joked two days after the 41st annual Big Bird runs, “I asked Mother Nature to wait a day!”  She did and the almost 400 participants at this festive race were glad of that.  Twenty-four hours after the Big Bird, much of southeast Michigan was buried in six inches to a foot of early season snow.  The rest of the week followed with frigid temperatures, even as low as single digits.

But race day was close to perfect, at least according to most of the runners.  Temperatures were in the low 40s at race start and climbed a few degrees by the finish.  Several times the sun tried to compete with the clouds, but mostly lost out.  Runners didn’t seem to mind the overcast morning.  There was a slight, if steady, wind coming out of the west.  A few runners mentioned it, but most didn’t think it had much effect.

Over the four decades of Big Bird history, the course has remained pretty much the same, with only slight changes.  It is flat and fast, the only “hills,” as Lipinski called them at the starting line, were the climbs of the pedestrian overpass across I-696, out and back.

Many of the runners use the Big Bird to launch into the holiday season.  It’s always festive, with the Roseville High School band providing both the American and Canadian national anthems, the Roseville/Eastpointe recreation gym full of chatting runners and walkers, and the raffle of a couple of dozen turkeys, “big birds,” compliments of Christian Financial Credit Union.  Swag bags included a bright blue long-sleeved tee shirt, the annual running gloves courtesy of Hanson’s Running, and a mini-flashlight/key chain.

Sara Gerhardt used her 40:29 to finish first among the 10K women.  It was her initial win at the Big Bird, “although I was second a few times.”  Although “a bit disappointed at my time,” she was very happy about her victory and the turkey it brought.  Finishing three minutes ahead of the second place woman, Renee Cholyway, “There were no women to push me,” she later said.  “I ran with Rick Straughen and a small group of other friends.”  Gerhardt also remarked, “It was a little breezy out there.  I noticed it.”

John Worthington won the overall 10K race in his fourth Big Bird.  “It’s always a good course” and he found “perfect conditions this year.”  His 34:29 didn’t see him pull away for the victory; he had to work to the end for it.  “Second place pushed me,” he complimented with a smile.  “He was on me the whole time.  I couldn’t get him off me.”  “Second place” was former United States World Marathon Team member Clint Verran.  Verran was only two ticks behind in claiming the masters crown.  Both enjoyed winning their turkeys.

Rebecca Hendren is the cross country coach at Regina High School in Warren.  This was not her first Big Bird!  “I ran the Big Bird in the snow storm in ’84,” she recalled with a laugh.  “I love it.  It’s always so well run.”  Her son, David (27 years old), also ran it and he is a long-time racer here, too, winning an age-group medal.  Mom revealed, “He ran the one mile when he was a year and a half.”  That was in 1993!

Hendren also had other ties to this year’s race.  She coaches the Girls Running Club sponsored by the Roseville/Eastpoint Recreation Authority.  Lipinski noted, “Alyssa McKechnie from our office approached me with the idea of a girls running club.  I asked her to contact Rebecca to get it started.  They’ve both done a very good job with the program.  It’s one we’ll continue.”

Two of the Girls Running Club members did well in the 4K, getting to the awards stand.  Saniya Thurman (age 7) started with the program “eight weeks ago.”  In her first Big Bird, she finished second in her age group and was “excited” to have her winner’s medal hanging around her neck.  Teammate Tiffany Olinger (11) had a third place age-group finish also in her initial Big Bird.  She noted that, for practices, the team runs “around the Roseville Recreation property.”  That she also won a raffled turkey brought an even bigger smile to her face.

There were some more seasoned runners, too.  David Rau thought it was “a great day to run.”  He counted “fifteen or sixteen Big Birds” to his credit, “maybe twenty.”  The 73-year old “started [here] in my 40s.”  His age-group win (52:23) capped off a good year of running for him.  Earlier in the summer, Rau qualified for and ran four events in the National Senior Games in Albuquerque, New Mexico--the 400, 1500, 5K, and 10K, winning one ribbon.  A bonus was having his two daughters, one from Kentucky and the other from Arizona, join him there.

Harrison Hensley (87) ran the 4K.  When asked how many Big Birds he has run, he paused before replying, “I can’t tell, a ton of them.  I’ve been coming here a long time.”  He noted that the day before he ran the Salute to Veterans 5K in Milan.  That was his “86th 5K of the year,” he noted.  “I try to get in 100 a year.”  Last year he finished 113 of them, acknowledging that he enjoys the “social” nature of racing.

Another long-recognized face at the Big Bird was Ella Willis.  Michigan runners will recall Willis is a four-time Detroit Free Press Marathon winner.  This year she ran the Free Press Half Marathon.  At the Big Bird, Lipinski noted, “She set the women’s course record in 1983 with a time of 35:20.”  He added, “In 1993, she set the 35-39 age-group record at 36:29.  So, ten years later she was only one minute slower!”  The past “five years or so” she said she’s run the 4K here.  This morning, the 62-year old won her age-group with an 18:05, good for 15th overall.  Asked about coming to next year’s Big Bird, she enthusiastically responded with, “Oh yes!  Definitely!”

One runner who was missed was Darrell McKee.  He had run every one of the previous forty Big Birds.  Word was he recently had a hernia surgery that kept him out of this year’s race.  His absence was noted by more than a few.

As I arrived, I took it as a good sign that I had to park on the back soccer fields for the first time in several years.  Granted there were only eleven or twelve cars parked there, but when I mentioned the soccer field parking to Lipinski, he grinned, “That’s a good thing.”  Yes it was, as numbers for all three events were up by about fifty over the last couple of years.

I don’t race much anymore, only entering a few races a year.  But one I always put on my race calendar is the Roseville Big Bird.  I’ve run it every year but one since 1988, missing in ’91 for an out-of-state family wedding, and I am looking forward to the 42nd annual Big Bird in 2020.  If you are looking for a first-class race, competitive, fun, and well-run, seriously think about putting the Big Bird on your 2020 calendar, too.