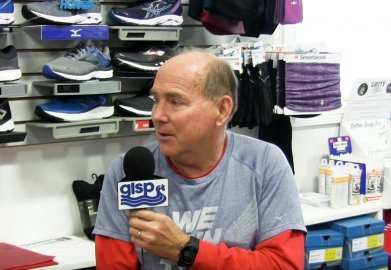 For many runners, finishing the Boston Marathon is a milestone, maybe the milestone, in their running experiences.  The Boston Marathon is the oldest marathon in the United States and one of the most prestigious in the world.  That would be enough for most folks, but toss in that entrants must qualify by meeting standards set by running an earlier marathon under a certain time.  That is, for the most part, a runner doesn’t just fill out the entry form, pay the registration fee, and the run.  He or she must be pretty fast.

Genesee County’s Mark Bauman has done almost all Boston finishers one better.  In fact, he’s done them forty-nine better!  This past April, Bauman ran and complete his fiftieth consecutive Boston Marathon.  The 69-year old became merely the second runner and the only one from Michigan to accomplish that remarkable feat.  It’s a testament to his running ability, commitment to fitness, and smart and healthy training habits.

He began his long runner career in the autumn of 1965, he said, “my junior year of high school” at Flint Ainsworth.  He ran cross country and track.

Bauman, who is the owner of Bauman’s Running and Walking Shop in Flint, ran his first marathon in Boston in 1970.  It was also the first marathon he finished.  He entered the 1969 Motor City Marathon on Belle Isle in Detroit (a precursor of the Free Press Marathon).  But, he admitted, “I didn’t finish.”

So how did he qualify for Boston?

After graduating from Ainsworth, “I was running at Flint Community College,” since renamed Charles Stewart Mott Community College.  “Paul Griffin was my coach and he was planning on running Boston.”  Bauman “and couple of other guys,” including Tyrone Griffin, “trained with him.”   Both teammates then ran in Boston, too.

So, if entry to Boston requires a qualifying time at a previous marathon, and Bauman had not yet completed one……  He explained that the qualifying standards were different then.  Of course, a sub-three-hour marathon finish worked.  So did a qualifying time in a half marathon, as well as “a note from a coach.”  He quipped, “I had the note.”

Now, from year to year,

Bauman continues to qualify by meeting this standard.  “If I finish the previous Boston Marathon under six hours from when the last person crossed the starting line, I qualify.”  With so many, tens of thousands, runners now, there is a staggered start.  Runners, based on their qualifying times, are herded into corrals and are released when the starting line and course congestion clears a bit.  Bauman’s time last April, 6:31:32, made him eligible for the 2020 marathon.  He said, “I registered yesterday (August 26) for next year,” he grinned.

Although, “at one time,” Bauman put in 100 miles a week, sometimes doing two daily workouts, he’s made some smart concessions to getting older.  He now averages, “in the mid-30s [miles] per week.  I’m fairly consistent with my mileage.”  This has helped him to remain largely injury-free.  “I’ve been lucky,” he said, “lucky” and smart.  “In the weeks leading up to the marathon, I do long runs, up to twenty miles.”

This year, his fiftieth, was extra special. “I ran the last stretch,” about a quarter mile down Boylston to Copley Square, “with my two granddaughters.  That was cool!”

Bauman has a number of other race streaks, too.  He has run every Free Press Marathon, which began in 1978, in addition to the last Motor City Marathon the year before.  He’s also run all forty-four years of the Volkslaufe in Frankenmuth, sometimes different distances.  And he is one of a handful of runners who have finished all forty-three Crim 10 Miles, one of his favorite races.