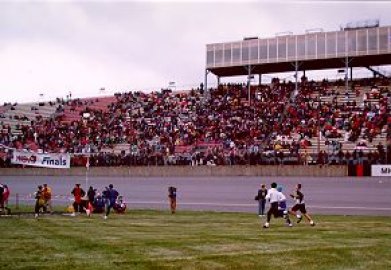 The Ryan Johns story continues. After his very successful school running experiences, both individual and as a team member, he attended Michigan State University. “I graduated with a Bachelors in Supply Chain Management,” he noted.

He did no running in college, but “I stayed in shape, mostly from weight training in the gym.” Post-graduation, he tried to keep it up, but ran into a common bugaboo, demands on his time. “Work, marriage, and the start of a new family [twins, Gavin and Landon] put gym time on the back burner,” he lamented.

Finally, when he turned thirty-one, “I decided that running needed to come back into my life. Several factors led to this.”

He and Christy were expecting son number three, Tyler. Johns began to reflect on his own health and wellness. “I knew I wasn’t in horrible shape, but I also knew I wasn’t in great shape. I wanted to change the way I looked and felt.” It almost seemed natural. “Getting back into running was always on my radar.”

Johns’ sister, Melissa Broyles, was also an influence. A year and a half older than her brother, she began to run. “She had never run in her life and rarely engaged in any competitive sports growing up.” She not only began to enter road races; she won local 5Ks. “She kept getting better and better,” he said. Candidly, he added, “I was so happy for her, but at the same time for the first time in many years my competitive nature about running returned.”

He quipped, “In my mind there was only runner in the family and that was me. Yet Melissa was out there running and progressing to some very impressive times.” Bragging on his older sister, he said, “Melissa has turned into an exceptional distance runner in the state. She’s broken three hours in the marathon at the age of forty!,” he gushed. Brother and sister “often run and train together.”

The last factor leading to his running rebirth was learned at White Lake Junior High and Lakeland High School. “Always set goals,” he was taught. He had “always set annual life goals and bucket list goals.” Somewhere in that bucket was to run a marathon. He reckoned, “It seemed like it was time to pursue that.”

He called Nick Stration, his old junior high coach. “We sat down and developed a ground-up plan to get me back in shape.” Almost a year elapsed before he strengthened his body, his legs, knees, hips, the core, to support running. He lost thirty-five pounds and finished his first marathon in 2010. “I didn’t have a clue how to run a marathon. I ended up going out too fast and paying for it in the last 10K.” But he had rediscovered the fire. “After that race, I knew I had found the love of running once again.”

He’s also recorded fast times in the half marathon. In 2014, he finished in 1:11 at the Bayshore (Traverse City), good for second place, and two years later did 1:10 in Indianapolis. Tackling the 5K at the Ann Arbor Firecracker, he was especially happy when he broke sixteen minutes. “That was a time I was running in high school.”

Johns remains excited that he has continued to set personal best times over the past ten years, even upon entering the masters division. He continues to take his running and racing seriously. “I train hard when I decide that I’m going to sign up for a race.” But the seriousness and hard training have taught some valuable lessons.

He ran three marathons within a year’s time—Detroit in the fall, Boston in the spring, Chicago in the fall. His excitement to be back running and racing got the best of him. Injuries followed and his times began to plateau. He learned. “I don’t do as many races each year to really allow for recovery. I just enjoy longer periods of base training with easy miles.”

The Johns Family lived in Budapest, Hungary because of his job. “Training there,” he recalled, “was adventurous.” Although thousands of miles from Michigan, “I found a sense of home through running.” And he discovered that Hungarians love to run. He found many areas and different types of terrain for good base training. “In fact,” he said, “training in Hungary for the 2019 Boston was fantastic. We live in the mountains of Buda and that hilly terrain was ideal for what I needed to achieve an aggressive time on the Boston course.”

He admitted, “My training has evolved in the last ten years. It’s amazing to think how much running has changed since my high school days. There’s so much more science around it.”

Training for his initial marathon was “traditional,” as he called it. He did his long runs on the weekends, “three twenty-mile runs.” There was also one workout a week that focused on speed or strength. “It wasn’t a bad plan, but it was traditional and certainly didn’t represent the latest philosophies surrounding distance running and marathon training.” With Stration, he changed his training, adding longer tempo runs and more hills and strength repeats.

Johns also began working with Brendan Martin, a Hanson’s Distance Project runner. He credits Martin for helping him to that second place Grand Rapids finish, where he set a nine-minute personal best.

Training for the ’19 Boston, he put in eight weeks of between 70 and 95 miles each. He followed a nine-day running cycle, then took a rest day. When a half marathon is the target, he maxes out at 70- to 75-mile weeks, building up with eight weeks of 55 to 70 miles each.

The “longer periods of base training” see him cut back to 30 to 50 “easy miles.” He remembers the lesson of too much too often. This maintains his general conditioning, but also allows his body to recover from the heavy training-segment miles.

In all, Johns remarked, “Family, work, and life all have to be balanced to make running work, to compete.” In selecting which races to target, “I look at how I’m feeling and how my body has reacted to the last training segment.” Also important are his family, personal, and professional obligations. That all helps him to choose a distance and race to run—a 5K, half marathon, or full marathon.

Other than running with his sister, Johns mostly trains alone “because of my work schedule and the schedule of my kids’ activities. My schedule varies, too, due to the global nature of my job. There are times you’ll find me training in the early hours of the morning, before 6:00, or late at night. I also try to prioritize getting some sort of miles in during lunch time.”

He does belong to a running group called “The Sandbaggers.” He chuckled, “The group is appropriately named. You can never tell who is actually in shape. No one is really forthright with their level of fitness.” Although The Sandbaggers are there “more for the camaraderie of running and the enjoyment of communicating with others who also enjoy running,” there is some seriousness, too. “We have terrific runners from all around the country.” And the group has won the Crim team championship each of the last three years.

For Ryan Johns, the return to running has borne many benefits. “Running has balanced me,” he said. “People who know me know I’m a naturally passionate person. I love what I do. I have always had the philosophy that if you are going to do something, why not be great at it. That’s allowed me to have many successes in life. But it can also be exhausting, both on a personal and professional level. Running has been a form of meditation that I need to balance that passion.” He is convinced that “balance” has helped him to become a better father, husband, and employee. “It’s not a coincidence that my career at Eaton began to really take off when running came back into my life. I use the hour or ninety minutes [of running] in my day to think through life, work, and family. That allows me to prioritize my focus and energy.”

He continued, “The wellness of running has made me a happier individual. If you feel good and are happy with yourself, you can focus more attention on others.” He’s not the first to say, “Being the father of three young boys is not easy. They are all active. They all play multiple sports. Keeping up with them and a demanding job is exhausting at times. Running has allowed me to be an active father. I’m involved and there’s no better feeling that being able to physically share in the fun times of raising three active boys.”

Finally, “My competitive side has had an outlet the last ten years. While I may not have run for those twelve years, you never lose who you are. I love competition. I have had the privilege of running more than ten marathons, eight half marathons, and many 5Ks and 10Ks. Each one, I’m competing. I’m either there to try to win the race or win my age-group.”

Ryan Johns is not close to being done with running. He’s planning to run another marathon in the fall. “I’m probably going to target a flat, fast course and go for that sub-2:30. To be able to achieve that after running 2:33 in each of my last three marathons would bring great personal satisfaction, especially at the age of forty.”

Long-range plans after that include “to continue to run and target specific races. Running will continue to be a big part of my life in my forties and hopefully well beyond.” It sounds like a plan!