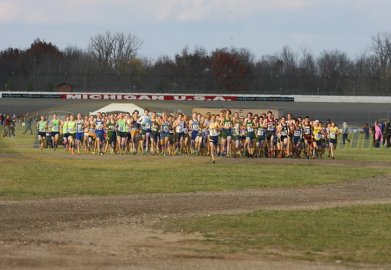 Some runners got an early start with the sport, beginning in high school or even in junior high,
running track and/or cross country. Others began later in their lives, perhaps after schooling, marriage,
and starting families. This was me. Through high school and college, the only running I did was chasing,
dribbling, carrying, or after hitting a ball of some sort.

A third group ran when younger, stopped, perhaps even for some years, and then found running
again at a later age. Runner Ryan Johns falls into this last category. Both before and after his 12-year
hiatus, he’s found considerable enjoyment, success, and life lessons.

Johns is 40-years old. He married his “high school sweetheart,” Christy, and they have a growing
family. Gavin and Landon are 11-year old twins and their younger brother, Tyler, is 8. Currently, Johns
is Vice President of Global Purchasing for Eaton Corporation.

His earliest “official” running was as a seventh grader at White Lake Middle School in White
Lake. Unofficially, though, he figured he might have “some talent” for running while he attended Brooks
Elementary School, also in White Lake. Sherry Bell, his elementary physical education teacher, held
traditional one-mile time trials for her fifth-grade students. Johns noticed that “There was a substantial
gap, several minutes, between me and the next runners.” His teacher also noticed. “Ms. Bell started to
talk to me about middle school and for me to try running.”

He did, but not initially. “I didn’t run in sixth grade. I can’t really explain why.” A year-end all-
grade school sports challenge included an open mile event for each grade level. That provided some
impetus. “I ended up winning the sixth-grade mile,” he recalled. From there, his classmates and
coaches urged him to try the school’s running teams the next year.

“I decided to go out for cross country in seventh grade and became part of a great running
tradition at White Lake and [later] Lakeland High School.” At each place, Johns experienced both team
and individual success.

He noted the middle school’s incredible record. “I was joining a program that had not lost a
race, either dual meets or invitationals, in two years. And while I attended White Lake, we didn’t lose
for another two years.” He thought that the team didn’t lose for two more years after that. “Six years
without losing a cross country race!” he enthused.

Johns conceded, “I am naturally competitive. I love to win, at anything, any sport, any
competition.” Personally, he said, “The success and competitiveness of the [White Lake] program had
an instant impact on me.” He singled out his middle school coach, Nick Stration, who “had built a great
feeder program to Lakeland High School. He recruited and accumulated the best athletes in the school
to run. This led to very deep and internally competitive teams.”

As a seventh grader, he ran among “the top seven,” which included eighth-grade runners, “right
away.” But he remembered that, “We had such a deep team that any runner, from number four to
number ten, could make the top seven any given week.” Even competing against the older runners,
Johns finished “most of the races in the top seven.”

The next year’s team was even better. “In eighth grade, we had one of the most dominant
teams in school history. In all but two meets and invitationals we swept the competition, went 1-2-3.”
He was part of that sweeping “trio, which included Nick Gow and Lance Binoniemi.” Before graduating
from Lakeland High School, the three of them became all-state runners, with Gow later running at the
University of Illinois.

Despite the individual successes, Johns noted that winning as a team was more important, to
him and to his teammates. Often, he recalled, “Our toughest competition was within our own team.
We fought hard to compete for that number one spot!”

Team and individual success continued in high school at Lakeland. Johns’ first three years saw
the cross country team finish fifth, second, and second in the state meets. Still excited, he added, “We
won the state title in ’96, the only undefeated team in school history.”
Reminiscing, he went on. “We won that state title my senior year even though Nick Gow, our
number one runner, had to drop out of the race during the first mile at the Michigan International
Speedway with a broken leg. There aren’t too many teams that can say they won a state title without
their number one, ‘all-everything’ runner!”

Thinking back, he said, “I can count on one hand the number of losses we had during my four
years in cross country.” Those four years brought league and Oakland County championships each year
and three regional titles, too.

Johns was also a varsity runner all four years on the talented and successful Lakeland track
team. We won the state two-mile relay and set the school record my senior year.” In doing so, the
“trio” of Johns, Binoniemi, and Gow were joined by Anthony Sager. During his high school career, he
won the two-mile event at the league meet two times and, his senior year, earned all-state accolades.
He reminisced about those high school years. “My individual success was somewhat moderated
by the role I played on the team. I was the pace-setter at practices, ensuring that we came together as a
team and hit the times the coach expected us to hit.” But, as before, for Johns the team success came
first. He emphasized, “I have no regrets about my role in the program.” To him, it was rewarding to
always see the team prepared, with runners pushing themselves daily at practices. “We had some
exceptional talent on that team.”

From high school, Johns went to Michigan State. He graduated with a Bachelors degree in
Supply Chain Management. “I was recruited by Division Two and Division Three colleges, but in the end
I decided to attend MSU.” But he didn’t run there.

“The most honest answer I can give for the reason why is I was burned out. I loved running , but
I put everything I had into winning the state championship in ’96.” Those close calls in 1994 and 1995,
being runners-up in the state meet each year, were “bitter pills that stuck with me.” And, he said, “It
still does.”

“My senior year we put 110% into going after the state title.” He and his teammates changed a
lot—some of their workouts, their philosophy of racing, and even some traditions, “to best prepare
ourselves.” For him that was draining.

As noted, Johns has “no regrets,” again emphasizing the “no.” But he concedes that all the
success, preparing for it, “came at a price. I was burned out and had depleted all my emotional equity in
the sport [running]. I was ready to put it in the past.”

Next month, we’ll continue with Ryan Johns’ story, including his return to running, how and why
he came back, his motivation, his successes as a road racer, how he trains especially with his family and
full-time job, and more.