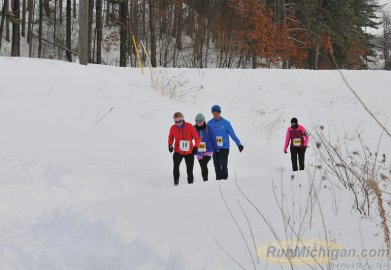 It’s hard to remember a worse winter for running or even walking around here than this past one.  While we didn’t have any major snowstorms in this part (the southeast) of the state (Are 5-6” of snow major droppings?  I don’t think so.), much of the rest of Michigan seems to have had a bit snowier than usual winter, but only a bit.

But it wasn’t the snow, not at all, that made this winter one to remember for runners.  (And for school kids!  I think, finally, the last week of February was the first full week of school since before Christmas for Michael.  There were a variety of “snow days”—cold, windchill, ice, and even snow!)  Besides, I really enjoy running in the snow, even 5-6” of it.  It was everything else that Mother Nature threw at us.

One of my dog-walking buddies at the state park said in mid-March, ”This winter has been terrible.  I don’t remember a worse one.”  To emphasize, he was leaving without much of a walk.  Cody, his dog, couldn’t walk on the trails, legs splaying out in all directions, unable to gain any traction.  They went home.

Ironically, particularly for those who don’t run, the coldest days were the least troublesome, at least for me.  On numerous mornings we were met with sub-zero overnight temperatures.  The coldest reached, at least here, 15° below.   (It may have been colder overnight.  When Karen and I arrived home from yoga about 9:00 PM, it was 15 below.  When I went out to run the next morning about 8:00, it was also 15 below.  Did it get colder in between?  I don’t know.  I was sleeping.)  There were several other double-digit below zero mornings, too.  Yet none of them really hampered my runs.  Granted, I layered up, as many as five layers along with two pairs of gloves and two ski-masks.  But the running was fine; I didn’t cut short any runs due to temperatures.

At yoga class on one of these frigid mornings, our instructor asked me, “You didn’t run in this stuff did you?”  Before I could reply, Karen said, “Of course he did.”  That brought a look of surprise, with Karen adding, “He’s crazy.”  After the laughter died a bit, I corrected her, “I prefer to call it ‘dedicated.’”  That brought more laughs.  But, dressing properly, the cold has never been bothersome to me.

I think the worst condition by far was this winter’s ice.  Always a hazard that challenges winter running, I don’t recall more than we had this year.   There were a number of ice storms.  But there were also snow days followed by short thaws and then frigid temperatures again.  There were rain storms followed by those cold, cold days.  All three of these conditions resulted in ice and lots of it.

The trails at the state park were worst hit.  I avoided them for several weeks as they were impassable, at least to a runner categorized by his wife as “crazy.”  But the shoulders of roads and the back roads were also bad, very bad on some days.  I was surprised that I fell only two times (Yes, I kept track.) the entire winter.

Other than lightning, the only weather phenomenon that might cause me to scratch a run is wind, a very strong wind.  I can’t stand it.  Rechecking my training log, three times the winds led me to forgo my workout this year.   One was particularly unusual.  My running buddy Bob and I even canceled a weekend run; that doesn’t happen often at all.

I did make some adjustments, though, in the face of the brutal conditions.  As noted, I stayed off the trails for a few weeks.  Sometimes I walked instead of ran, especially when the icy streets forced me to move over to people’s snow-covered lawns where the footing was better.  I cut short some runs, too, leading to fewer weekly miles, not meeting my weekly mileage goals.  But, I reminded myself more than once, “They’re just numbers, that’s all, just numbers.”

Other veteran runners echoed my thoughts. Maggy Zidar also called it, “a brutal winter.”  She added, “I’ve been fortunate enough to escape a bit of it.”  At the end of January she traveled to Miami, finishing the marathon there—her 172nd marathon!!!!!!  And it was her first since hip replacement surgery eighteen months ago.  “For the first half of February, I visited my sister in Guadalajara.”  Daily runs there were done in 70 degrees, followed my swimming in an outdoor pool!

But she noted, “The rest of the time I suffered like all Michigan.  But I’m still so happy to be allowed to run that I haven’t missed a single day, even those bone-chilling days in January.”  (Now I feel like a wimp!)  She quipped, “I have a neighbor who regularly calls me ‘a crazy lady,’ to which I reply, ‘I know, but I’m happy.”  I know the feeling, both of them.

Joe Burns “ran mostly outside this winter.”  But he, too, was forced to make some concessions.  “I had to wear long pants twice, maybe three times, so far.  So it wasn’t that bad.”  The self-named “Slow Joe” explained.  “I like wearing shorts as long as it’s not too windy and above 20 degrees.”  For him, “The key is to keep my hands warm.  I have some big snowmobile mittens that have inner gloves and they work great.”  He admitted, “Some of my running friends get a kick out of me wearing shorts, but also having the big gloves on.”  Pausing as if to consider that, “I guess it does look funny, so I can’t blame them for laughing.”

Jillian Mattson Peck agreed, “Yes, this winter has thrown us several monkey wrenches!”  That has led her to “run more indoors” at the local high school facilities than outside.   She still managed to get in her “long Saturday runs at Kensington,” but noted the weather conditions “require numerous clothing and shoe options—road or trail [shoes], Yaks, screw shoes……”  She said, too, that “Living on a gravel road was always a challenge.  Will it be icy or muddy?”  On the worst of days, “I would skip a run and cross train on the bike or rowing machine.”  It’s been a tough winter for her, especially since “I set my sights on Bayshore [Marathon in May].”

Like me, Donna Swanson said, “I do not like indoor running.  So, I stuck with running outside, but I definitely did shorter distances than usual.”  Using some creativity, “I also substituted snowshoeing for running when the snow was deep.  It’s a great workout!”  That also induced her to do the Bigfoot 10K in Traverse City.  “It was my first snowshoe race ever.  I will definitely do that one again.  The woods and trails were beautiful!”

The brutal weather this winter didn’t affect Amy Masternak.  She didn’t run shorter or less often and she didn’t run indoors.  She said, “Winter is a beautiful time to run.  Yes, it is cold, but that being said, and this has been said many ways, ‘There is no such thing as bad weather, just a poor choice of running gear.’”  Ever practical she said, “Sheet metal screws in the shoes is my way to go.  They are lightweight and at the end of the winter those shoes are ready to be recycled anyway.”  Food for thought.

With a little luck, the worst of the winter of 2018-19 is behind us.  I, for one, am really looking forward to warmer and dryer weather, for running and for biking.