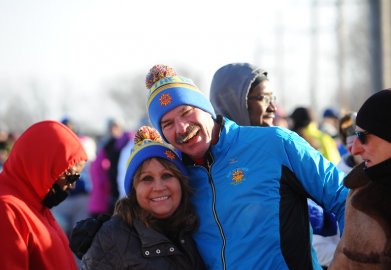 Continuing with the theme from February’s column, here are some more lessons and tips from seasoned runners.

Long-time runner (42 years) and age-group ace Nina Bovio believes one of the most important things runners can learn from their running is patience.  “Patience is the key!” she said.  “The greatest gift I have received through my running years is patience!”  She began running at age 29 “to lose weight and give up smoking.”  But she “keeps feeling all the many benefits.”

Bovio later explained, “Through running we learn to pace ourselves.  We learn forgiveness by accepting daily weather and [different] courses.  [These] translate to forgiving human flaws, mainly our own.  Running and the challenges it brings help us to build character.”  She cited the “parallels [between] running and life.  I grow most by adversity because I become spiritually stronger, an optimist.”  She added, perhaps as much for our day-to-day routines, “Running helps to eat well and sleep soundly.”

Dave Foley was my first editor at Michigan Runner magazine.  It was a post he held for about fifteen years.  As might be expected, he is also an accomplished runner.  Since 1975, he “has logged over 95,000 miles,” becoming one of the top runners in the state.

He offered some advice he gave “years ago.  If you’re a dedicated runner, when you think about the next day, the question is not ‘if,’ but ‘when.”  Before I go to bed each night, I look ahead to the next day and figure when I can fit in the run.”  For instance, he explained, “If the schedule is complicated and getting a run done is uncertain, I opt for an early run.  Rarely does anyone have a commitment at five or six in the morning.  That’s a perfect time to get one in if life is busy.”

Mike “Flagman” Bowen offered a practical tip.  Surely tongue-in-cheek, he noted, “Being a seasoned and experienced long-distance trail marathoner and ultra-runner, I found out that humans cannot see in the dark.”  He explained, “I was at deer camp a day early and went for a late afternoon run on the North Country Trail, south of Baldwin [Michigan].”  It’s a trail Bowen knows well, but oops!  “I quickly realized it was going to get dark earlier than usual in November.”  He lamented, “Too late!  I turned around and headed back the way I came.”

He stopped in the by now darkness “in a small clearing where I had to find the trail out of it.”  But he was without a flashlight.  “It got very confusing and I finally took the trail back to the first cross-road, a two-tracker, and turned south.”  He came upon a gravel road that was familiar and ran the roads back to the cabin—a long way after dark!

“Lesson learned,” he conceded.  “Put fresh batteries in the flashlight and take it with you.”  Bowen then quipped, “The guys at camp were just organizing a search detail."

Bill Kilmar has been running for more than forty years.  The septuagenarian (Now that I’ve gained entry into that club, it’s a fun word for me to use.) offered a litany of “lessons and tips.”  Regarding shoes, “Invest in a good pair and purchase new ones at least twice a year.”  Similarly, “Purchase good support socks.”  He added, “For winter running, nothing is better than Gore-Tex, including hat and gloves.”

He continued.  “Take advantage of local races in your community, especially the ones that are fund-raisers.”  With those in mind, “Proudly wear your race shirts.  They start conversations.”  He advocates sending e-mails to race directors, “especially if you have positive comments.  It’s a tough job and directors like feedback.”

To help us “enjoy running, it keeps us healthy,” he said, “augment your running with biking.  Maybe run one day and bike the next.”  And, “running with family members is a plus.”  The Kalmar family often shows up at races en masse.  “Our son, Bill Jr., and daughter-in-law, Kim, are marathoners.  Our granddaughter, Rachel, is a runner.”  He proudly noted, “We all run together in the Roseville Big Bird Run every year.”

With all these wonderful and worthwhile tips and lessons from last month and this, I have a few I’ve picked up over the years, too.

A couple of months ago I ran into a long-time runner, George Heitsch, who I hadn’t seen in some time.  We asked the same question of ourselves, which really wasn’t a question in that we knew the answer.  “Are you still running?”  Of course we were.  He qualified his response, though, “if plodding is considered running.”  It sure is.  I confessed to substituting a day or two of walking each week for running days.  In fact, I added “and if I feel like walking during a run, I walk.”  Septuagenarians can do that.

This idea, walking, is one promulgated by Jeff Galloway.  He stresses “walk breaks.”  Prior to this, I suppose like many runners, for me it was, “Real runners don’t walk.”  But Galloway was an Olympian and that carried a lot of weight.  If an Olympian thinks walking is all right……  It took some time before it really sank in, but it finally did.  It’s OK to walk.

Some years ago, one of my college history professors retired after forty-nine years of teaching.  At the time I asked him, “Professor, why not just go one more year and make it an even fifty?”  With a calmness that reminded me of what a great teacher Professor Czap was, he replied, “Ron, forty-nine or fifty?  What does it matter?  They’re just numbers, that’s all.”  Indeed that’s all they are and they have reflected upon my running.

I wouldn’t say I’ve ever been obsessed with numbers, for example, how many miles I’ve run on a particular day or in a week.  Oh, when I was training for specific race distances, especially marathons, weekly mileage mattered quite a bit.  And I still record my miles in a log, too.

But, although sometimes more important than other times, the numbers don’t have to be an obsession.  I was reminded of this several weeks ago.  I was wrapping up a long run and my GPS watch read, “9.9 miles.”  My initial thought was, “’Just go another’ tenth for an even ten miles.”   Then I remembered Professor Czap, “They’re just numbers.”  I recorded “9.9” in my log.

I’ve discovered that far more often than not, if I get out there when I try to talk myself out of a run, I am rewarded.  It’s rare, very rare, when I regret going for a run.  There are days to take a break, but more times than not, I’m glad I didn’t.

After a wet run—rain, snow and slush—a great way to dry running shoes is to stuff them with newspapers.  Usually after a couple of hours I will remove and replace them with other newspaper pages.  If needed, I’ll repeat.  This works very well.

I learned this from Tom Henderson, long-time state runner and writer.  In racing, run the tangents.  Especially if you have a time or finish goal, running the tangents of a course provides the shortest distance from start to end, while, of course, still running the race distance.  This doesn’t include cutting corners or otherwise cheating.  Most races don’t provide any outward clues, but “the thin blue line” at the Crim allows runners to run the shortest course—10 miles, not 10.1 or whatever.

This one I’ve learned, but not very well.  I think it’s not in my nature.  Don’t fear trying something new.  I ran for eleven or twelve years before I tried my hand (or feet) at a marathon.  I had found the distance and the training for it to be daunting.  But I found I enjoyed it, the training perhaps more than the event.  Try racing.  Try a new distance.  Try a trail race or even one on the track.

For years I said I wanted to bike.  Oh, I was never interested in racing or extremely long distances, just some relaxing, recreational biking.  For instance, on a good week, I’ll get in fifty or sixty miles, rarely longer.  But it took a long time for me to finally start.  In fact, Karen bought me a bike and it sat in the garage for a couple of years before I used it.  Now, in the better weather, I bike as much as I run.

The same thing happened with yoga.  Michael Holmes, my blind running partner, extolled the virtues of yoga.  For years he tried to get me to try it, to no avail.  “Hey, Ron, you should try yoga,” he’d tell me.  I didn’t.  Karen, when she retired, and our friend Carrie Farnum started taking classes.  After a while they, too, urged me to try.  I didn’t.  Finally, probably to get them off my back, I went to class with them. That was more than a year ago and I am excited about yoga practices now as I was then.  Like with my bike, I only regret I didn’t start earlier.

From last month and this, I have learned or relearned some things that will help make my running better.  I hope you have, too.