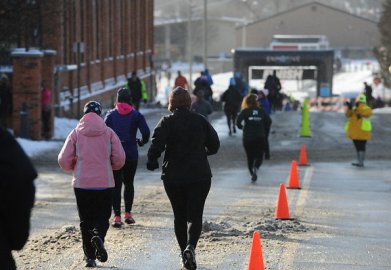 In more than 40 years of running (not including all those years I ran, but only to chase, carry, hit, or shoot a ball of some sort), I think I’ve learned a thing or two.  At least I hope so. Some lessons stemmed from running and pertain to it, but some can also be applied more broadly to life in general. And, obversely, more worldly lessons can help to improve and make more enjoyable our running experiences.

I picked up some tips from the many books and magazine articles I have read.  Some I learned on my own, by trial and error or, regrettably, the hard way. But, over the years, many runners have taught me a lot more than I figured out on my own.

For this month, I asked more than a dozen veteran runners if they had any tips, any lessons to pass along.  There was a good response, both in quantity and quality. I’ll share half of them now and the rest next month.

Herman Smith has been running for more than two decades, “twenty-five years,” and still loves to run.  His “one big tip” is simple, but important. “Less is more!” he emphasized.  Smith explained, “I certainly have learned that if I want to be able to continue to run, I really have to run smarter.”  For him, “smarter” means “less.”  As much as he enjoys running, he can’t put in the miles he did when he was a younger man.  He goes back quite a few years to the beginning of this tip. “I remember, when I was twenty-nine, an older gentleman said to me, ‘You wait until you are forty-five or so……’”  The implication was clear, at least it is now, but Smith remembers then, “I thought, ‘Whatever, dude. That will not be me.’” But he admits, in his case, this “older gentleman…was spot on!”

At 74 years of age, Ellis Boal “just crossed 79,000 miles combined of running and cross country skiing.”  He concedes he is “way slower than in my prime,” but, “Sometimes I win my age-group,” adding perhaps disingenuously, “typically when I am the only one in it.”

He is “not sure” what he’s learned from those years and miles of running, but has some thoughts on that.  “Maybe the ability to focus on tasks, such as an all-nighter the day before the [recent] election.” He also suggested “the ability of doing intense clerical work on a political initiative and then driving 150 miles to pick up boxes of signatures the next day, all while wearing a heart monitor due to suspicious blood pressure reading the preceding weeks.”  Running, how does that fit in? “Somehow,” he surmised, “I analogize that [such tasks] to focusing on overcoming pain and fatigue in a marathon.”

Ruth Thelen has been running “for over forty years,” she said.  She’s run and raced alone and with others as a member of several championship racing teams.  Her brief “tip for others,” and “my life’s motto,” is “You do not have to own it in order to enjoy it.”  She enthused, “I can run through rain, snow, sleet, and wind and on warm sunny days.” She can run any time, any place, and she can do it, as she notes, “for free!”

Seventy-year old Mike Rollason has been a runner for more than fifty years.  In his younger days, he completed a marathon in two hours and twenty minutes.  A bit older, when he was forty-three, he ran a 15:50 5K. To Rollason, one thing he’s learned was derived from “the simple fairness of the sport. The more you trained, the better you ran.”  There’s one of those life lessons in there. But he also learned patience and caution. “Note that if you do too much too soon, you will get injured.”

Tim Gallagher began running in 1995, “at thirty years old after thinking for my first thirty years that running was not a sport and that ‘just running’ was stupid.  Boy, was I wrong!” (That sounds a lot like me, on both counts.) He noted that, in October 1995, “just five months after my first run, I ran my first Free Press [Marathon].  And I have loved running ever since.”

Gallagher believes strongly in running with others.  “Find a group to run with. I love running in a group, even if I end up the only one at my pace.  Just starting out as a group and finishing, eventually!, as a group leads to great camaraderie and confidence.  It’s a reason to get out there.” He cited other benefits, too, such as finding and running with friends, helping the community, and being safe on the run.

He named several groups with which he runs, including his own organized parkrun in Livonia on Saturday mornings.  “Everyone should be located near a free group,” meaning without cost, “that they can go run with, learn from, and ask questions about events, teams, relays, etc.”

A past Michigan Runner-of-the-Year, Peggy Zeeb has been at it “for over twenty years.”  She noted that she has just begun to run again, “having to take two months off, after she hurt herself, not running, but “working in the yard.”  Her words of wisdom include, “Not every run has to have a purpose.” Explaining, she said, “One of the biggest mistakes I’ve seen runners make is overtraining.  Increasing miles too fast and never giving yourself time off is bound to lead to injury.” Not every run needs to be a speed workout, hill repeats, or very long distance.  Zeeb added, “I love finding a nice dirt trail and jogging slowly and enjoying nature.” Come to think of it, such a run has a great “purpose!”

Bob Drapal and I have been running buddies for twenty-five years or more.  We constantly joke about we “old guys running.” A week or so ago, we met up for our weekly run and he said to me, “I’m sure glad there’s another crazy old guy out here running,” as we trudged though five or six inches of freshly-fallen overnight snow.

But he’s not just an “old guy” who has run all those years.  Tucked away in his past, is a sub-three hour marathon.

Those years have provided him some lessons, “old guy running lessons,” he quipped.  “Listen to your body and don’t push through injuries,” he said. I know many runners will pooh-pooh these as clichés.   But just as many will fall victim to “injuries” by not “listening.” Runners, me included, are often stubborn and need to be reminded.

But Drapal added suggestions for enjoying running, too.  “Run with friends and family. It’s a great social activity.”  He practices what he preaches, running races with his daughter and son, their spouses, and his grandchildren.  “Continue to race; it’s fun to compete,” citing his appreciation for age-groups. “They keep us competitive.” Find a race “for a good cause.”  To stay safe, he said, “Be nice to motorists. They may be jerks sometimes [on the road], but they are bigger and faster than us.”

Next month I’ll continue with more tips and lessons from other experienced runners.  I may even add a few of my own.