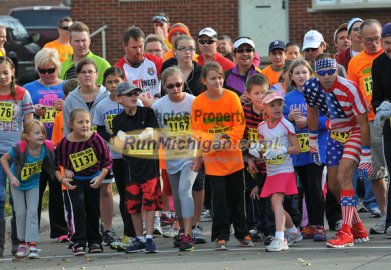 Sunday morning, November 11,  dawned partly cloudy, but brisk.  Temperatures hovered just below the freezing point at race start.  The snow that had greeted many in Southeast Michigan on Friday and Saturday mornings was melted and the roads were clear and dry for the 40th annual Big Bird Runs.

Perhaps not the coldest Big Bird that veterans can remember, but it was pretty close.  Yet the sun frequently peaked from behind the few clouds and Old Glory on the RARE (Recreation Authority for Roseville and Eastpointe) center flag pole showed only the slightest of furls.  A few hardy souls ran in shorts and tee shirts.

Once attracting 1,100 or more runners and walkers, the Big Bird has witnessed a significant decline in numbers over the past decade or so.  That’s a bit of a mystery.  Part of the answer lies in that the London, Ontario Road Runners no longer show up en masse with dozens of entrants.  Another factor is the absence of the large contingent of runners and walkers from Cadillac Motors

It was strange to see the parking situation.  Arriving a bit later than I had planned due to freeway construction and closures, it was almost eerie to view the vacant field behind the RARE center, used for soccer, unused for Big Bird parking.  It was empty instead of jam-packed as on race day years ago.

Still, why runners don’t come in larger numbers is a puzzle.  The entry fee is very reasonable, far lower than many area races.  The RARE facility used for pre- and post-race activities is great—two gyms and plenty of room, locker rooms with showers, plenty of lounging areas and rest rooms.  Two dozen turkeys (“Big Birds”) are raffled.  Nice hardware (plaques) and swag are awarded to overall and age-group winners.  The race (from early race director Larry Snelling to Kevin Wasilewski to current director Tony Lipinski) is well-organized.  The course has plenty of marshals in volunteers and the Roseville police and is flat and fast, the only hills coming on a pedestrian overpass across the Reuther Freeway (I-696).  And the often unpredictable weather over the years (temperatures from the 20s to the 70s, strong winds, snow, ice, rain, sun) is fickle enough to provide the Big Bird with additional charm.

Although the numbers are not what Tony Lipinski would prefer, the Big Bird seems to have settled into a comfort niche of sorts, attracting about 400 runners and walkers for its three races—one mile (62 finishers), 4K (112), and 10K (157)

And what would the Big Bird be without Darrell McKee?  This was his 40th—all of them!  The 84-year old completed the 4K.  “I didn’t race it,” he explained.  “I stopped racing last year when some 80-year old woman beat me and beat me good!  She was fast!”

Matt Fecht returned to defend his 2016 and 2017 10K titles.  He successfully completed his three-peat (32:08).  Of the eight Big Birds he’s run, he has won five of them, including the last three.  Despite the chill (“It was cold!  Next year I hope they turn up the heat,” he laughed after the race.), he bettered last year’s time by 22 seconds and 2016’s by nearly two minutes.  And he wasn’t pushed, winning by nearly four minutes.

The win “was especially nice,” he said afterward, “because it’s the 40th year.”  In fact, he was faced with a choice, defend at the Big Bird or at another race which he won last year.  He also cited how the proceeds from the Big Bird go to provide financial assistance to a number of community activities and projects.  Fecht used the Big Bird and another 10K to prepare for the California International Marathon on December 2.  In the meantime, the teacher will celebrate and enjoy his Big Bird victory and look forward to providing a Thanksgiving breakfast for his at-risk students.

On the other hand, Cassie Williams found the conditions “absolutely perfect!  I loved the weather.”  It was so “perfect” that she finished first among the women in just her second Big Bird 10K (47:44).  She’s also run the one mile here twice.  “It was a little windy when you crossed the [pedestrian] overpass,” she admitted.  She was sure to add special thanks to “the great support, the police, the volunteers, and the spectators.  They helped to make it nice.”

Williams also mentioned her “partner in crime.”  That was her husband, Alex, a fellow runner who nabbed first place overall in the mile—by almost 20 seconds (5:38).  While he was winning that race, Cassie was seen with their infant son in his stroller.  Then, Alex did the strolling duties while Cassie ran.

At the awards ceremony, one of the two Big Bird founders, Russ LaBarge, offered some of his recollections.  “The first two years, there was one prize—a live turkey!”  The awards crowd has a loud collective chuckle at that.  Later, the other founder, then race director Larry Snelling, reminisced.  “It was a big deal for me, especially when we were drawing over a thousand runners.”

If you are looking for a well-organized, reasonably-priced, competitive but fun race, really consider putting the Big Bird on your 2019 race calendar.

Full results can be found at www.eastsideracingcompany.com.