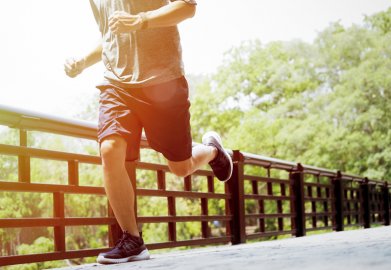 So, what is this, summer or early spring?  It’s been hard to tell on a week-to-week basis.  Often, the deer fly population is an indicator.  Most years they don’t show up on my usual running trails until mid-July, the Fourth at the earliest.  But not this year.

Two weeks ago, the third week in June, they were out en masse.  On the trails before 7 AM, two of my dog-walking buddies noted, “Hey, they’re all over you!”  “They” were the deer flies.  I had prepared for them, though, with my scented dryer sheets and insect repellent.  Those kept the pesky pests off most of me, but they still hovered and buzzed all around me.

Maybe the temperatures had something to do with it.  Those mornings of multi-deer flies were in the upper 60s and lower 70s, even that early!  Later that evening, continuing with that heat, Michael caught a whole baseball game, with game-time temperatures in the low 90s.  It was a hot spell.

A week later, the 6 AM temperatures barely registered 50 degrees.  Nary a deer fly bothered me.  The first day I was prepared with my anti-pest deterrents.  Knowing the forecast for the next day, I left them at home, unneeded.

Speaking of temperatures, high ones, my running friend Carrie had foot surgery about five or six weeks ago.  Last week she was ready to run again, “to start our regular schedule.”  We, of course, mixed in a lot of walking with our running and stayed on a paved pathway.  But she chose two very warm (70+ degrees) and humid mornings to start.  Especially the second day, we both looked like drowned rats as we scurried to yoga class down the road.  If nothing else, beginning on those less than ideal days shows how much Carrie wants and likes to run.

I know I’ve written about noise in the past, how we need to have a “Quiet Day.”  I don’t think anyone paid attention.  It’s as if noise has become an industry.  Several of my neighbors have mowers with engines intended for Boeing 747s.  Karen, Michael, and I enjoy eating dinner outside, on the deck.  But it’s as if the neighbors collude, waiting until we sit down, meal ready, one of them starting the jet engine.

The trails usually provide an escape from the noise for me.  But two days out there recently did not do the job.  Most of my trail runs (either solo or with Carrie) are in the woods, the deep woods, a mile or more from civilization or, at least, roads.  I can even hear the river babbling.  On these days, again before 7 AM, about a mile or mile and a half from any roads, subdivisions, single home, anything, there it was.  I’m not certain what “it” was, but the noise was loud, sounding like a semi-tractor grinding it out in first or second gear, never shifting higher.  “It” began shortly after I started, about ten minutes into my run, and followed me throughout.  I don’t know the source and couldn’t really determine the exact direction.  I’m not even sure if it was inside or outside of the state park.  But “it” seemed to fill the air, destroying my quiet.

I vividly recall Professor Romer’s class in physics at Amherst College, almost 50 years ago, where I was introduced to Einstein’s special theory (as well as to lasers and cathode ray tubes, that is old-time television screens; we built both).  By the way, Professor Romer was a runner, completing several Boston Marathons, including the 100th.  For his 50th birthday, he ran the Echo Valley Marathon, one he created.  It consisted of 105 laps around the quarter mile cul de sac where his house was.  He beat you to it.  “It was stupid,” he wrote to me.  It may or may not have been “stupid,” but I can assure you Professor Romer is not.  He was one of my very best teachers.  His essay on how to prepare a lesson plan should be required reading for every teacher, new and old, physics or any discipline.

Back to relativity, that is, frames of reference.  After an up-and-down winter and early spring of running—piriformis/sciatica problems, the Michigan Crud/Flu, injuries to two of my running partners, Carrie and Michael Holmes), at the beginning of June, I strung together three really good runs on consecutive days.  They were about six miles each.  Then I thought, hmmm……  “18 miles?  In 3 days?  While marathon training, you did 18 or more miles every other week, sometimes weekly.”  But Einstein, unknowingly, helped me out.  Perspective, Ron, Perspective.

Similarly, consider our daily or weekly runs, often the same runs on the same routes or courses.  How often do they produce very different results?  The run can be wonderful one day and rotten the next.  Frames of reference.  Heat and humidity or cold and snow.  Rain and wind.  Mood.  Rest.  Age.  In a sense, though, this is one of the attractive things about running.  It’s always different, even when it’s the same.

At a recent social gathering, a non-runner threw out the old shibboleth on why he doesn’t run.  No, it wasn’t “I have bad knees.”  No, he said, “It’s boring.”  Huh?  “Boring?”  I’ve never understood that reasoning.  As I just noted, even the same runs are different.  And whether running alone or with others, how can “boring” enter the picture?

Running solo, I find it frightening that one can be bored with his/her own thoughts.  The whole universe is open to our thinking.  I frequently have so many ideas I forget most by the time I’m done running.  How many good (Well, I thought they were good, good for columns, articles, e-mails, and even blogs.) ideas have I left out on the trails or roads?

How can running with others be “boring?”  Whether its Michael or Bob or Carrie, we always have something to say.  Sometimes we even come up with plans to save the world!  Bob and I talk sports and our kids and grandkids and much more.  Michael is always inspirational, both in his efforts (he is blind) and his words.  Carrie just said the other day when we finished a run, “I really missed our conversations” while she was laid up, recovering from surgery.

Maybe people mistake discomfort for boredom; I don’t know.  Sure, some runs are tough and we want them to be done sooner rather than later.  Workouts can be hard, even hurt.  But that’s not boredom.

OK, this last little bit might be X-rated.  I’ve been trying to solve a problem, one of night-time sleep interruptions, that is, potty breaks.  (Is that X-rated, “potty breaks?”)  I really, really don’t want to take medications for it.  My physician said my usual two or three trips, if they don’t seem to affect my rest, probably don’t require drugs.  Still, with two or three interruptions, I have experimented.

At the risk of dehydration, I’ve cut back a little on fluids.  With the warmer weather, I should be drinking more, but I’m not.  That seemed to work, to a degree.  I can sleep for 4 and even 5 hours without waking.  And 5 hours is often all the sleep I get anyway.

The trade-off has been a few cramps.  They may come while using my foam roller, but also during yoga.  I realize that sounds counter-intuitive.  But my body doesn’t bend in certain ways and never has.  Mostly the cramps are isolated in my hamstrings, but there have been occasionally cramps in my calves and upper back.

I’m still experimenting, adding more fruit, if not a lot more fluids, to my diet.  That seems to be working, on both fronts.  Cramps are lessening, even with the heat, and potty breaks have continued to be confined to one or sometimes two a night.  What was it Dr. George Sheehan called each of us runners, “an experiment of one.”