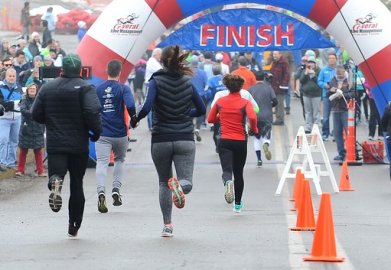 That’s when I started running.  So that makes this month an anniversary for me—forty-three years of running.   In some ways, the biggest surprise to me is that I began in the first place.

Oh, I had always run as a kid and even older, but only if chasing a ball was involved.  Running for the sake of running?  Oh no, that wasn’t for me.  Of course, I ran to get in shape for other sports—sprints for baseball, football, and basketball.  I even joined in on longer jaunts through the Amherst bird sanctuary while training for college rugby.  But I had never run just to run, never.

Physical education classes were always my favorites in school.  Well, all except the units on track (and the one on tumbling).  I couldn’t wait for those three weeks to be over.

I remember when and why I started running, quite clearly.  Karen and I had been married in December 1974.  I was lifting weights regularly and still played some occasional pick-up basketball.  I was coaching high school football and baseball, too.  But I found myself almost fifty pounds above my college playing weight and wasn’t happy about that.  I determined to do something about it.  That “something” is now comical to me.

Even when coaching, I usually arrived home before Karen did from her job.  The summer after our wedding, I was also taking a full load of graduate courses, but still was home first.  One warm sunny afternoon, with an hour or so to kill, I started—running.

I dressed like, well, like I was going to play basketball, especially with my shoes.  I put on a tee shirt and some shorts along with my basketball sneakers, a pair of red Bata Bullets.  Remember them?  I wonder if they are still produced.  What did I know about running?

Behind our then apartment building was a large wooded field.  I had found what looked to be a path and headed out, timing myself on an old Davy Crockett wrist watch I had received maybe fifteen or sixteen years earlier.  Yes, it still worked just fine, but I had to carry it rather than wear it; the strap no longer fit around my wrist.

For whatever reasons, unknown to me know, I ran out into those woods for eleven minutes, stopped, turned around, and ran back eleven minutes.

That was it, my first run—twenty-two minutes.  I don’t remember being particularly gassed, although I was, as Matt would later call it, pretty “schweaty.”

Karen found me cooling off, sitting on the stoop outside the apartment door, when she arrived home.  “What are you doing?”  I wonder if my explanation led her to believe I’d still be doing this forty-three years later.

I have no recollection of a second run, but I must have taken one, along with a third and a fourth and……

In fact, with the school schedule changes the next year (1976), running after the later practices wasn’t feasible.  So, I started arriving at school by 5:00 or 5:30 AM to run.  And, again, guess who joined me?  Yep, they did.  It became a routine, running followed by a few days a week in the weight room before showering up for classes.  Larry and I kept at it for fifteen years, before school.

Just this past Memorial Day at a holiday gathering, Bruce brought up our long-ago morning runs.  About half a mile from the school was a hill, a very steep hill.  He laughed as he reminisced.  On Friday mornings, game days, in the dark, Bruce recalled how the three of us would finish our three or so miles with sprints (more than one!) up that hill.  None of us wanted to be the first one to say “uncle,” quitting before the others.  At that Memorial Day gathering, Bruce just shook his head and chuckled, “Boy, we were crazy!”

Over the years I came to embrace my solo runs.  They were great for thinking, planning, etc.  But just about twenty-five years ago, on a Sunday morning run, I ran into a group of three other runners.  One of them I knew from work we did through Junior Achievement.  We ran a bit together and made plans to meet the next Sunday.  In fact, now, all those years later, I still meet my running buddy Bob Drapal almost every Sunday, although our runs are not quite as long.

Then, not quite twenty years ago, I hooked up with a blind runner, Michael Holmes.  We’d run together about once a week, me guiding, although not always very well!  Oh, we ran races together and trained for several marathons, with runs of up to twenty-three miles.  Only recently, due to his illness, injury, and wear-and-tear, have we stopped.

Then about three years ago, Carrie Farnum asked, “Would you run with me?”  She and Karen had been walking for quite a while, many years.  Carrie, a competitive sort, was looking for “more of a challenge.”  Running fit the bill.  Often we’d walk with Karen, either before or after our own runs.  We’re still at it, several times a week.

Initially I had no intention of racing, none at all.  Although I knew about high school and college cross country and track and the Olympics and those sorts of races, I had no idea there were such things as road races to run.  Through some other runners I did learn about them and finally decided to run one in 1986.  It was the West Bloomfield Half Marathon, my first race.  Wait—the first one was a half marathon?  Yes, it was.  What did I know?  I remember how excited I was about the entire affair—the event itself, the atmosphere, the friendliness of the other runners, and a tee shirt!  I still have that tee shirt.

At that race, one of the veteran runners, Bob Littky, was talking about an upcoming race, a few weeks hence.  It was the Chai Run or, rather, Runs, with a variety of distances from 5K up to eighteen miles, held at the Jewish Community Center in Farmington Hills.  Littky piqued my interest and I registered—for the eighteen miler.  I don’t remember if I had ever run that far before, but I did that day, including some of the miles with Littky.

My first marathon also came in 1986, the Free Press.  I finished it fairly easily, even mowing the lawn when I got home.  I thought running a marathon was pretty cool, but also figured that was it; one was enough.  But it wasn’t.  I ended up running a few more, one a year in the mid-1990s.  My last one was about fifteen or sixteen years ago.  I had trained Michael Holmes to run the Free Press and was in shape myself, so I ran it, too.  I have no desire to run another.

I no longer race very much, maybe a couple of races year, if that.  At one time, my goal was at least one race a month each year.  Those days are long past.  I miss the events/races and, especially, the atmosphere and other runners.  But I don’t miss the training and, for me, running a race just to run it, without training to run my best doesn’t work.

In 1987, I began to write about what I had come to love so much, running.  My first article was coverage of the Dearborn Harvest Run, a 10K run not too far from my boyhood stomping grounds, for Michigan Runner.  It’s hard to believe I wrote for MR for thirty years or so, even contributing an occasional online article now.  Along the way, I’ve had pieces in maybe half a dozen running magazines or newsletters, including a couple of short ones in Runner’s World, and wrote weekly columns in a couple of the Metro newspapers.  And, if you are reading this, you know I have a monthly column at RMDC.

Forty-three years.  That’s quite some time.  Not recently, but folks occasionally would ask me how long I intended to keep at it.  I have never really thought about that, that is, stopping.  Running has become an integral part of my life and my plan is to continue as long as I can.