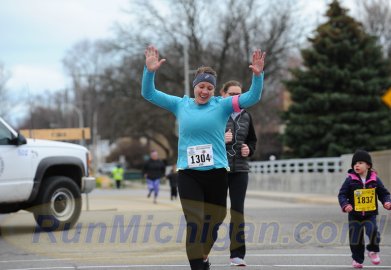 More than once recently, while running, I thought to myself, "What are your doing out here? Are you crazy?" Yep, my next birthday will be my 70th; I’ll be a septuagenarian. Yet there I was, out there pounding out miles on the road. Isn’t that crazy?

Of course, I laughed. I know why I’m out there and much of the time there are few places I’d rather be. It doesn’t matter how old I am. If I don’t or can’t run, I just don’t feel right—all day. I was reminded of this a number of times earlier in February and March when I had this virus one of my friends called "the Michigan crud." I told Karen, "I’m not going to be a good old person. I don’t like not being able to do things." She laughed and gave me this pearl of wisdom, "Then don’t get old." I think I’ll take her advice.

It was Joe Henderson, one of my all-time favorite running writers (or writing runners?) who described long distance running not necessarily by mileage, but by age, running long into one’s years. I think that’s a great concept. How fortunate I am to still be running, for more than 40 years!

We read of lots of folks who keep running well past their golden years. Ed Whitlock, from Toronto, broke three hours in marathon at age 70 and when he turned 85, he ran sub-four hours. Katherine Switzer, the first woman to officially finish the Boston Marathon, continues to run marathons into her 70s. This past March, Julie Hawkins set a new age-group record for the 100 meters, 40.12 seconds. Oh, she’s 101 years old! And at the same meet, Orville Rogers ran a four-minute, sixteen-second 400 meters to break the record for 100-year olds.

Not all of us are setting records or even running that long. But many runners continue to get in their miles. How do these long-distance runners keep at it? After all, there could be many reasons to stop, to curl up in that easy chair and watch reruns of Law and Order all day. There are family and, for those still in the job force, work commitments. Some bodies and minds have had enough. Injuries can have taken their toll. But here are some Michigan runners still at it, running and even racing. They tell how they’ve managed to continue.

"I started running just before turning 30, to give up smoking two packs of cigarettes a day."

She cited many reasons why she still runs and races. Many of those reasons include the word "love." She said, "I still race. I love running. I love goals. Setting goals with running helps me to lead a disciplined life." She went on. "I still run because I love being outside with Mother Nature. I love the results from running regarding health and sleep." She didn’t forget to add, "I love all the friendships I have made through my running career."

One of those friendships is with Maggy Zidar. The 67-year old started running at the age of 30.


"I have found it so fulfilling—physically, mentally, emotionally, and spiritually."

Like Bovio, she remarked, "Most of my dearest friends are people I’ve met running." Zidar did admit that, three and a half decades later, she’s "learning to run again." She had hip replacement surgery seven months ago. She said, "I’m appreciating starting and finishing with slow, slow times." With enthusiasm, she announced that she hopes to run two marathons this fall, her 171st and 172nd!

Mark Cryderman is 71, but didn’t begin running until he was 49 years old. He explained,..

"In 1995…Doug Kurtis brought the Roadrunner Classic 10K to Northville. I was on the city council and approved the run."

Since he gave his OK, Cryderman figured he would run it, too. And he did. "So, I give Doug credit for getting me started!" He is still racing, "averaging 20 or more runs a year. I’ve gone back to my favorite, the 5K. I love the distance and my body is telling me not to push it with longer race distances." He still runs and races because "I love the competition, reaching goals, and being around good people. Runners are a great bunch." He also appreciates that running, "in general, uses volunteers for races. So it’s important to give back. I volunteer on several races and have even measured some courses."

Cryderman admits to adjusting his training.

"I’ve scaled back my training run length to five miles every other day." On off-days, he swims a mile. "It’s a great exercise that is not hard on the joints."

My running buddy Bob Drapal turned 73 in April. He ran track in high school and college as a sprinter. He ran cross country only one year, "which I hated." He said, "I started jogging in grad school to stay in shape. I saw a guy wearing a Dexter-Ann Arbor tee shirt and thought it was cool." So he decided to run it, the second of now forty-five Dex-AAs.

Dexter/Ann Arbor led him to "get serious and I ran seven marathons." He has broken three hours for a marathon and qualified for and ran the 100th Boston Marathon. Now, though, Drapal only races a few times a year.

He admits to this change, "I used to love running by myself, but now love running with friends and family." His daughter, Laura, recently took to running. "We occasionally run together and she has passed me by. I’m so proud of her." And Drapal continues to be a guide runner for our blind running friend, Michael Holmes, meeting him once a week.

Ruth Thelen is another septuagenarian (73) who still runs. She began almost 36 years ago, "in the winter of 1982." She said, "Although I don’t run as many races as I used to, I [still] run the track and road racing." She considered why she still runs and sounded a lot like me!

"I ask myself that question often. I’m not sure if I know why. I do love the outdoors and like to be moving. I guess one of the main reasons is for my health. My doctor says I am extremely healthy for being so elderly. I also like to compete." Like many others, she enjoys "the friendship of among other runners, great people! And I have met people from all over the world, especially in USATF and National Senior Games events."

She also follows some rules of sorts. "I’m a big believer in rest. I don’t try to run through injuries. I cross-train and eat healthy." But Thelen admits to "on occasion, relaxing and enjoying eating and drinking anything I want." When on family trips, "I seldom run. It’s a time for me to just rest my body and enjoy family fun." She categorized herself as "a lazy runner. I often wish I had a running addiction," adding, "but I do not. It’s [sometimes] hard for me to motivate myself to get out the door!"Peggy Zeeb is :

She began running "about twenty-two years ago. I started running because I wanted to run with my son who planned on running cross country." Entering her own first race, she discovered "I was pretty fast. So then I trained hard and ran to compete."

Zeeb has found that "as I’ve slowed down, I run now because I love running. I love finding new trails and places to run. And I still love the friendships you find at races." Although she concedes

"I no longer have the drive to compete, I found a race in Bakersfield, California last summer while we were traveling. I wasn’t fast."

But she was pleasantly surprised that "I unexpectedly won it for the women!" In her desire to find new venues she recently discovered a 12K trail race that she ran in April.Herman Smith seems almost like a youngster at 49, but he’s been running for more than twenty years. "I was always an active athlete in high school." But after his "fun times" in college, he began running at age twenty-seven "just to get in shape again. I enjoy lifting weights and doing cardio workouts in the gym. But," he conceded, "nothing is like running. I just can’t run as fast and as often as I did in my late twenties and early thirties."

He has made adjustments to keep running. "It’s all about a smart pace and proper time off. I just have to run smarter and get more sleep than I when I was younger." He went on, "I rarely sign up to race these days." But last summer he trained to run his first marathon in ten years. "I finished," he lamented, "but it reminded me why I don’t race anymore."

"I am one of the lucky ones," Smith said.

"I simply love working out just about every morning. It is really my favorite thing to do daily. I look forward to it. I really enjoy alternating running and lifting. I can’t go hard week after week; my body just can’t take it when it comes to running."

He makes sure he gets enough rest and proper nutrition. "Eating correctly is something I have always tried to do."

Mike "Flagman" Bowen admits to being "69 years young." He, like a number of others, didn’t begin running until he was in his mid-30s.

"I was battling some mental problems, survivors’ guilt from the Vietnam War, was overweight and a heavy smoker, and wanted to be a better person."

Along the way, he’s had his difficulties and hurdles with running. "Both knees have been rebuilt and I had cancer in 2006 that slowed me down for a couple months," he understated. He still enters races, many of them in fact, but the last time he raced one was the 1992 Boston Marathon. There, "everything clicked" and he finished in 2:50:39. He’s run 52 marathons, including six "in Beantown," he said. He still does "trail runs, a few ultras, and some benefit runs. But I don’t care much about my time."

"Wanting to continue my string of Bobby Crim ten milers, 34 in a row, gets me out [running] almost every day." He tries to get in five to eight miles in "all kinds of weather. I still run with a POW/MIA flag and will continue to carry it until the body wears out. My motto is ‘The prisoners of war don’t get #%*$& days off, so neither will I!" To date, Bowen has run 58,282 miles with the flag, one for each name on the Vietnam War Memorial in Washington, DC. He finished that in 2013 and then ran 3,030 for those who died on 9/11/2002. And now, "I continue to run for those who have died in Afghanistan and Iraq."

In the Army, Bowen learned "to listen to my body and mind" and he’s applied that to his running. Another military lesson was "adapt and overcome," which he’s also done in both training and races.

What does it take to be an endurance runner, one lucky enough to run for years and years? Competition? Moderation in training? Healthy eating and rest? Strength-training? Yoga and/or stretching exercises? Friendships? Cross-training? We can each find what motivates us to keep running, for its physical, mental, and spiritual benefits.