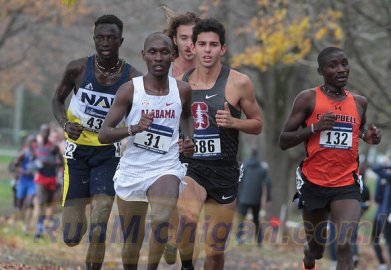 NCAA Cross Country Nationals weekend is here for 2017. Michigan schools and individuals have always had strong showings at the national level and this year is not any different.

In NCAA Division One, both Michigan State and University of Michigan's Men's and Women's teams qualified automatically out of last Friday's Great Lakes Regional.

At that regional meet men's race, in Terre Haute, IN on November 10, the Spartans of Michigan State took home the team title with 68 points while the University of Michigan finished second with 79.

Both teams earned automatic qualifying spots for the November 17 national meet in Louisville, KY. Only the top two teams at the regional meet qualify automatically to nationals.

Individually at the NCAA D1 Great Lakes Regional, Michigan's Ben Flanagan cruised to a six-second victory with a time of 30:54 for the 10K course. Individual runner-up honors went to Eastern Michigan's Hlynur Andresson in 31:00.

Eastern Michigan finished in fourth place overall in the team standings, but unfortunately did not receive one of the few additional "at-large" team bids for the national meet. EMU's Andresson however did qualify individually.

For the women at the Great Lakes Regional meet, the team order was reversed as the Michigan Wolverines finished in first spot with 71 points with Michigan State ending up not far behind with 87.

The Wolverines were led by the strong one-two finishes of Gena Sereno and Jamie Morrissey. Sereno ran to a second place overall finish in 20:38 on the 6K course while Morrissey (Rochester Adams H.S.) was third in 20:39.

Both Michigan and Michigan State earned the automatic bids for the nationals by finishing one-two. Also qualifying as a team for the national meet by way of an additional at-large bid, was the Eastern Michigan University women's team.

How to follow the 2017 NCAA Division One XC Championship Meet

The State of Michigan has been very well represented at the top of both team and individual results at the NCAA Division Two level for a number of years now.

Heading into the national meet, Grand Valley is currently ranked second in the women's USTFCCCA rankings and the Laker men are ranked third.

Both the men and women of Grand Valley will be shooting for overall team titles on November 18 at the 2017 NCAA Division Two Cross Country National meet in Evansville, Indiana.

Meanwhile, also having another great year, the Hillsdale College women's team is currently ranked seventh heading into the national meet. And in addition to Hillsdale, the women of Northern Michigan also qualified as a team.

Ferris State's Trevor Holowaty will be competing as well, running as an individual qualifier.

How to follow the 2017 NCAA Division Two XC Championship Meet

At the NCAA Division Three level, Michigan will be represented by Calvin College as both men's and women's Knights teams will be competing.