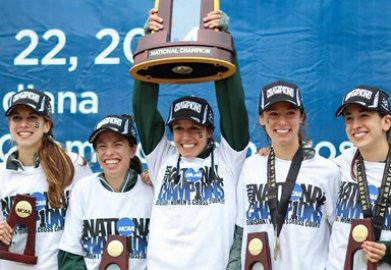 "We will take this meet as an opportunity to learn something and help move us forward," said Director of Cross Country Walt Drenth. "We have to learn from this and make us better. Our conference meet is coming up and we have to realize we can be in the top tier. All of our runners want to be nationally competitive, and I believe they can be. We have excelled in this type of environment so there is no need to think this group cannot do it as well."

The women were the first to compete at the ever growing Nuttycombe Wisconsin Invitational that brings in teams from every region. This year, there were 18 women's teams that are ranked in the U.S. Track & Field and Cross Country Coaches Association (USTFCCCA) Top-30 poll, including the No. 6-ranked Michigan State Spartans.

The Spartans finished in 19th place as a team, and were led by 12th place finisher senior Alexis Wiersma who notched a time of 20:28.6 - a season best. Senior Shelby Jackson also garnered a season-best time of 21:02.01 as the second Spartan to cross the finish line.

"I think we did manage a few details very well," said Drenth. "Our typical signatures ran well. I thought Alexis ran real well, and I thought Shelby Jackson ran well, but from my standpoint we just need to be a little more purposeful."

On the men's side, the No. 22-ranked Michigan State Spartans raced to an 18th place finish, edging out two-ranked opponents. Senior Sherod Hardt paced the way for MSU with a 39th place finish and a time of 24:28.05.

Freshman Jesse Hersha ran his best time of the 2016 campaign with a time of 24:53.0 to be the second MSU runner to finish. Junior Clark Ruiz raced near to Hersha, and crossed the line with a finishing time of 25:01.8. Freshman Morgan Beadlescom and freshman Matthew Thomas were the other two Spartans who helped round out the top five Spartan runners.

"We didn't have everyone today, and that hurt us a little," said Drenth. "I believe Sherod Hardt ran well, but I didn't think we were as good as we can be. We need to be more assertive, and we have to continue to improve."

The Michigan State men's and women's cross country teams return to action on Friday, Oct. 21 at the Eastern Michigan University Classic. The women's race will be run first and it is set to begin at 4 p.m.