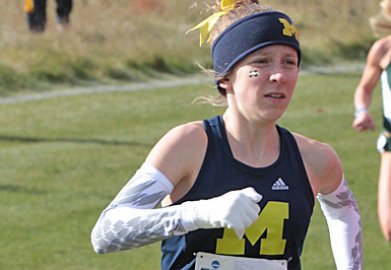 » Erin Finn won her fourth race in the last five meets this afternoon, using a 24-second margin of victory to show her dominance in a field featuring nearly 300 athletes.

» Michigan placed five of its scorers in the top 60 overall, including two in the top 25, and in the open race the Wolverines were victorious with just 16 points.

TERRE HAUTE, Ind. -- The 13th-ranked University of Michigan women's cross country team earned an impressive third-place showing against top competition at the adidas Pre-Nationals meet on Saturday (Oct. 15), led by another dominating performance from senior Erin Finn, who picked up her fourth individual victory over the last five meets with a solo effort to remember. U-M topped a pair of top-10 programs in the race and held its own in an elite field during a meet with big postseason implications at Lavern Gibson Championship Course.

Finn busted out early in a field with 284 finishers, and she found the pace to be lagging early. In Terre Haute, the race is open for the first 1,000 meters or so, and once the field moved past the flat opening stretch, Finn opened it up a bit, and she did not look back, building a sizeable lead that she did not relinquish.

"I felt really good, felt really controlled through the first two K and wanted to go a little bit so I did," Finn told Flotrack afterwards. "I picked it up to a pace I knew I could give more at and did that through about 4K."

From there, Finn opened things up over the last 1,500 meters or so. During her second 6,000-meter race of the year, she felt good challenging herself.

"Coach always says it takes three (6K races) to get it right," she said, "so hopefully I'll be better at Big Tens."

Finn was sixth at this meet a year ago, albeit on a different course, and she finished fourth the last time it was run in Terre Haute the year before, so the victory today was her first on the Pre-Nationals stage. Today, she shared that stage with four other top-60 scorers for Michigan, including one joining her in the top 25, junior Avery Evenson, who scored for the third time in her fourth scored meet as a Wolverine.

Senior/junior Gina Sereno was 49th in 20:59.2, and senior/junior Jamie Morrissey (21:00.8) and freshman Madeline Trevisan (21:03.0) joined her in the top 60 at 51st and 56th, respectively. Junior/sophomore Claire Borchers was about 17 seconds behind Trevisan, with senior/junior Jaimie Phelan just one second slower.

The Wolverines return to Ann Arbor and will run close to home next weekend with the EMU Fall Classic set for Friday (Oct. 21). The meet will serve as Michigan's last before the Big Ten Championships the following weekend (Oct. 30).