Provided by The Chicago Marathon.

- Pair of Michigan runners among top of American men's field

CHICAGO - The Bank of America Chicago Marathon today announced that the 2014 elite competition will feature five men with personal records (PR) of 2:05 or faster, and four women with the potential to break the tape on Columbus Drive under 2:20.

"This year's field is built for speed and record-breaking performances," said Bank of America Chicago Marathon Executive Race Director Carey Pinkowski. "We have big expectations due to this group of men and women who know how to race, dig deep and win." Kenenisa Bekele and Eliud Kipchoge began their competition on the start line more than a decade ago at the 2003 IAAF World Championships in the 5,000m. While the two men have gone head-to-head more than a dozen times in their careers, their biggest challenge on race day will be the course record, 2:03:45, set last year by Kenya's Dennis Kimetto. Only five men in history have broken 2:04 on record-eligible courses.

Bekele transitioned to the marathon this year after an illustrious track and cross-country career that produced four World Records (he currently holds the 5,000m and 10,000m records) and over 21 Olympic and World Champion titles. Similar to Bekele, Kipchoge transitioned from the track to the roads in 2012, and won his marathon debut at the 2013 Hamburg Marathon in a course record 2:05:30. He started his 2014 campaign with a win at the Rotterdam Marathon, clocking an even 2:05:00 despite windy conditions and uneven pacing.

Far from a two-person race, the 2014 field includes several men with the raw talent and right speed to join the quest for a new course record. Kenya's Sammy Kitwara returns to Chicago for a third time and brings something unique to this year's field: experience on Chicago's famously fast and flat course. Kitwara finished fourth in his Chicago debut (and marathon debut) in 2012, running 2:05:54. His speed over the half marathon distance - the fifth fastest men's time in history (58:48) - ranks him high among the list of potential winners.

Kenya's Bernard Koech does not have the longest resume in the field, but he has the second-fastest marathon PR, 2:04:53, from his marathon debut in Dubai in 2013; and like Kitwara, Koech has incredible half marathon speed. At the 2013 Rock 'n' Roll San Diego Half Marathon, he produced the fastest half marathon time run on American soil, beating Kipchoge by running 58:41.

Koji Kobayashi leads a strong contingent of Japanese runners. He started his year with a personal best at the 2014 Tokyo Marathon, finishing ninth in 2:08:51. Ecuador's Bayron Piedra rounds out the international field. The two-time Pan-Am Games silver medalist has little experience over long distances, but enough speed over 5,000m and 10,000m to clock a fast time. 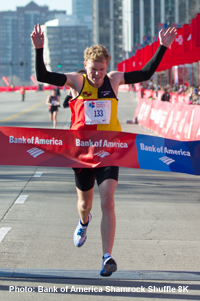 The American charge will be led by former track star-turned-distance runner and Hansons-Brooks ODP team member Bobby Curtis of Rochester Hills, Mich. (2:13:24). Joining him will be Craig Leon of Eugene, Ore. (2:13:52) and Tim Young of Fredericksburg, Va. (2:15:14). Hot off of his 25K American Record, Christo Landry of Ann Arbor, Mich. (2:14:44), is ripe for a breakthrough performance, and Matt Llano of Flagstaff, Ariz., hopes to stride past Ryan Hall's American marathon debut record of 2:08:24 when he toes the line for the first time.

Other members of the Hansons-Brooks team scheduled to compete at Chicago include Mike Morgan, Luke Humphrey, Brendan Gregg and Jake Riley.

Women's Field
Defending champion Rita Jeptoo and her training partner, Jemima Sumgong, will return to Chicago this October. Jeptoo ran her first career sub 2:20 in last year's race, the fifth fastest time in Chicago Marathon history, and she returns this fall after smashing the Boston Marathon course record in April, running 2:18:57. If Jeptoo cracks the 2:20 barrier for a third time, she will become just the third woman in history to run three career sub 2:20s. Sumgong, the 2013 Rotterdam Marathon champion, stayed with Jeptoo through 35K during last year's duel and came home with a second-place finish and a new personal best of 2:20:48.

Out to prevent a repeat one-two finish by Jeptoo and Sumgong is Kenya's Florence Kiplagat, the 2010 IAAF World Half Marathon champion and the 2011 and 2013 Berlin Marathon champion. Kiplagat pulled out of the 2012 Chicago Marathon with an injury, and she has made no secret of coming to Chicago this fall to improve her 2:19:44 personal best from the 2011 Berlin Marathon.

Twenty-year-old Birhane Dibaba stole the show at the 2014 Suja Rock 'n' Roll San Diego Half Marathon when she outsprinted Rita Jeptoo with 50 meters to go, winning in 1:09:34. Although Dibaba is the youngest competitor in the elite field, she has run six marathons. She ran her first marathon at age 18, and she has finished her last three marathons in 2:23 or under. 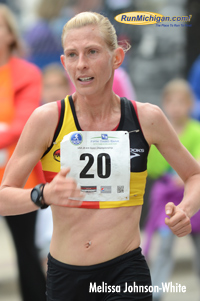 Amy Hastings (Providence, R.I.) leads a talented field of American women. Hastings, the ninth fastest American woman over the marathon distance and the fifth fastest over 10,000m, made her marathon debut in 2011 in convincing fashion, finishing second in the Los Angeles Marathon in 2:27:03.

Joining Hastings will be top American finisher at the 2013 Chicago Marathon, Clara Santucci of Dilliner, Pa., (2:29:54) and Becky Wade of Houston, Texas, dubbed America's best young marathon runner. Wade made her debut by winning the 2013 California International Marathon in 2:30:41. 2012 Olympian Lisa Uhl (Des Moines, Iowa), the seventh-fastest American over 10,000m, will make her marathon debut. Watching the 2013 Bank of America Chicago Marathon from the finish line inspired Uhl to re-evaluate her career and ultimately make the move to the marathon.

Two runners with ties to the State of Michigan are also in the elite women's field for 2014. Melissa White, a member of the Hansons-Brooks team from Rochester Hills and former Gull Lake High School and Michigan State University athlete Laura Portis will both be heading to Chicago to compete for top American honors. White comes in with a personal best of 2:32:37 while Portis brings a best marathon time of 2:33:46.

Athlete quotes
"I am looking forward to coming to Chicago and competing with Kenenisa on the road this time. I chose Chicago because it has a fast course and I want to better my personal best. It's also one of the best races in the world." - Eliud Kipchoge

"I am coming back to Chicago for the third time. Chicago is a nice city and it has a good sports atmosphere. I will try to run the race of my life this year, and if God gives me the strength, my target is to run 2:04:28." - Sammy Kitwara

"I'm very excited to run the Bank of America Chicago Marathon this fall. The depth of the field this year is incredible. I'm looking forward to seeing where I stand against the world's best, as well as how I stack up against some of the top Americans. Chicago is an exceptionally fast course so I hope to lower my PB of 2:13 by a few minutes. I've been training well so I think I have a realistic shot at 2:10 or 2:11, on a great day, maybe faster." - Bobby Curtis

"I was supposed to compete in the Chicago marathon two years ago but was out due to injury, but I am happy now to be part of the competition for my fans and supporters. It is no retreat and no surrender for me; it's a do-or-die game‎ and I will give all my best to succeed and make the 12th of October a great day!" - Florence Kiplagat

"Running the Chicago Marathon has been my dream since I started running, and it will be my first big race. My goal is to win and run 2 hours, 20 minutes or faster." - Birhane Dibaba

"I can't wait to be racing through the streets of Chicago. As a notoriously fast course, I am out there to run a PR and compete with some of the world's best until the very end." - Amy Hastings

The 2014 Chicago Marathon will take place on Sunday, October 12.