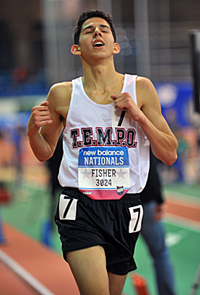 The award, which recognizes not only outstanding athletic excellence, but also high standards of academic
achievement and exemplary character demonstrated on and off the track, distinguishes Fisher as Michigan’s best high school boys track & field athlete.

The 5-foot-10, 140-pound junior won the 1600-meter run with a time of 4:10.82 and the 3200-meter run in 9:07.11 at the Division 1 state championship meet this spring. The reigning Gatorade National Boys Cross Country Runner of the Year, Fisher also captured gold in the mile at the New Balance Nationals Indoor championships in 2014 and finished first at this month’s adidas Dream Mile in 4:02.02, which ranked as the nation’s No. 2 performance among prep competitors this spring at the time of his selection.

An All-State Honorable Mention in soccer this past fall, Fisher has maintained a 3.95 GPA in the classroom. A peer tutor at his school, he has volunteered locally as part of an effort to renovate the Grand Blanc High athletics concession stand in addition to donating his time to youth sports programs. “Grant is very talented and very determined,” said Grand Blanc coach Ed Stanbury. “He had some big goals after cross country season and he was really able to meet them. Winning the double at the state meet was important to him, because only three or four kids have been able to do that in the last 20 years.”

Fisher will begin his senior year of high school this fall.

The selection process is administered by the Gatorade high school sports leadership team in partnership with USA TODAY High School Sports, which work with top sport-specific experts and a media advisory board of accomplished, veteran prep sports journalists to determine the state winners in each sport.