Other Michigan performances at the 2014 Brooks PR Invitational

Click for full results from the 2014 Brooks PR Invitational 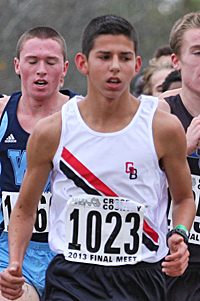 This Saturday, June 21st, some of our state’s best track and field athletes will compete at the Brooks PR Invitational, held at the University of Washington in Seattle. This prestigious invite only high school event will bring together a number of the country's best.

Grand Blanc’s Fisher, fresh off his victory at the Adidas Boys’ Dream Mile in New York City this past weekend, is set to compete in the Brooks PR's Two Mile Run. Fisher, whose 4:02.02 winning time in New York was one of the fastest ever mile times by a Michigan high schooler, is poised to run well again on the national stage.

Audrey Belf also competed at the Adidas Girls’ Dream Mile. Belf finished in 4:45.37 to take 5th. Set to compete in the Girls' Two Mile at the Brooks PR meet, Belf looks to improve on her outstanding 2014 season which included a second place finish at the 2014 New Balance Indoor Nationals and also a Michigan high school state title at 3200 meters.

Following the Two Mile at 5:50 PM EST, Anna Jefferson of Oak Park will compete in the girls' 400 Meters, having run the sixth fastest time (53.5) of those scheduled to compete.

Also on the girls’ side, Junior Ersula Farrow of Grosse Pointe South High School will race in the 800, beginning at 6:30 PM EST.

Rachel Coleman of Northville rounds out the list of those from Michigan competing. Racing in the Girls' One Mile Run at 7:25 PM EST, Coleman looks to build on her performances at the MHSAA Division One Finals (State 1600 Meter Champion) and New Balance Outdoor Nationals, where she placed second overall in the Girls' Mile Run.

Follow RunMichigan.com for updates and results from the 2014 Brooks PR Invitational.