NCAA D1, 2 and 3 and NAIA XC National meets Saturday - how you can follow

Michigan's best men and women collegiate cross country runners will be battling it out for national honors this Saturday, November 23, as the NCAA Divisions 1, 2 and 3 and the NAIA all hold their national cross country championships. 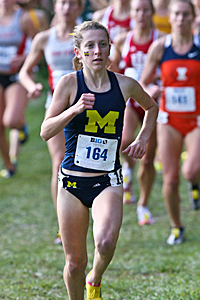 The NCAA Division I Championships will be hosted by Indiana State University and take place in Terre Haute Indiana. The Men's 10K will start at 12:00 p.m., EST and the Women's 6K starts at approximately 1:15 p.m., EST.

Our state will be led by the University of Michigan men's and women's teams, who both earned automatic bids to nationals by winning overall titles at the Great Lakes Regional Championships on November 15th in Madison, Wisconsin.

For the Michigan women's team, Freshman Erin Finn (West Bloomfield H.S.) ran out front from the start and ended up second overall, leading her team to the regional victory. The Wolverines also featured two other runners in the top 10 -- Shannon Osika (Waterford Mott H.S.) who placed sixth and Brook Handler (Rochester H.S.) who finished seventh.

Meanwhile, the Michigan State Spartan women's team qualified with an at-large berth after placing third at regionals. The Spartans have been led this year by junior Leah O'Connor who ran in high school at Croswell-Lexington High School.

In addition to the Wolverine men and women and Spartan women's team, Michigan State's Caleb Rhynard and Eastern Michigan's Victoria Voronko qualified as individuals for the NCAA Division I meet.

Also representing our state on teams outside of Michigan at the NCAA Division I meet:

Also qualifying for the Division II nationals were the women's teams from Saginaw Valley State and Hillsdale College along with the Ferris State University men. SVSU and Hillsdale went 2-3 at the regional meet.

At the NCAA Division III Championships, Michigan will be represented by Calvin College's men's and women's teams. The meet will be held at Hanover College in Hanover, Indiana with the women's 6K starting at 11:00 a.m., EST and the men's 8K going off at 12:30 p.m., EST.

Calvin's women's team finished first at regionals while the men of Calvin placed second. Calvin freshman Cassandra Vince took home the overall regional title in the women's race while Paul Lewis of Albion College (Albion H.S.) placed first in the men's race, earning him the automatic bid as an individual.

Also, the NAIA National XC Championships will also take place this Saturday. The NAIA meet will be held in Lawrence, Kansas. The men's 8K is scheduled to start at 11:30 a.m., EST while the women's 5K starts at 12:45 p.m, EST.

In the women's 5K race the lone qualifying team out of Michigan was Cornerstone University. Individually, six runners from Michigan qualified. Danae Dracht of Spring Arbor, Catie Rietsema and Carley Woolcot of Aquinas, Elaine Johnson of Siena Heights, Stacey Baron of Davenport and Julie Kassem of Michigan-Dearborn qualified as individuals.

For the NAIA men, Aquinas College, ranked sixth nationally, was the one team qualifier from Michigan. Kyle Anderson (Spring Arbor), Louis Falland (Cornerstone), Samuel Parlette, Brett Smith and Justin Bateson (all of Siena Heights) made it as individuals.

All NCAA national cross country races will be streamed live at the NCAA.COM website at the following link -- http://www.ncaa.com/liveschedule/2013/11/23.

Also, look for on-site updates during the day at both the NCAA Division I and NCAA Division II meets via the RunMichigan.com Twitter feed -- @rmdc_feed.

You can join along the conversation as well if you will be at one any NCAA national meet this Saturday or even if your'e not using the hash tag #runmich_ncaa. If you are at one of those locations, feel free to include your own photos from the meet and let us know how your team did!

RunMichigan.com will have full coverage with photos, interviews and more from the NCAA Division I meet in Terre Haute, Indiana.

And of course, look to RunMichigan.com for all post-race results and recaps.

Best of luck to all our Michigan schools and individuals competing at national xc meets this weekend!