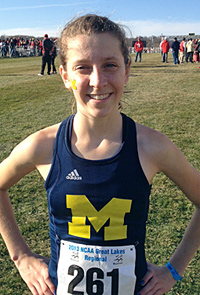 The University of Michigan men's and women's teams earned automatic bids to the NCAA Division One National Cross Country Championships by way of their dominating first place finishes at the Great Lakes Regional Meet on Friday, November 15 in Madison, Wisconsin.

Indiana State will host the championships at the Wabash Valley Family Sports Center. The men’s 10K race will begin at noon, EST, followed by the women’s 6K race at approximately 1:15 p.m., EST.

In order to be eligible to participate in the championships, teams and individuals qualified in their respective NCAA regional competitions.

Thirty-eight individuals were selected to participate in each championship through an automatic qualifier and at-large selection process. All individual qualifiers finished in the top 25 in their region.

The Spartans finished in third place as a team at yesterday's regional meet in Madison. MSU's women's team also won this year's Big Ten Championship and was ranked sixth nationally heading into the regional meet. 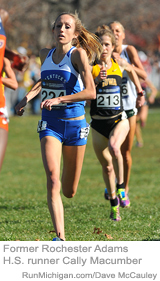 Other qualifiers, either team or individual with ties to the state of Michigan, include Stanford University with Troy High School graduate Mike Atchoo, The University of Washington with Megan Goethals of Rochester High School, Wisconsin's women's team with Gabi Anzalone from Grand Blanc and Cally Macumber of Kentucky who qualified individually.

Macumber competed for Adams High School in Rochester and finished in sixth pace overall at the 2012 NCAA Division One Cross Country Championships. Her time for the 2012 National meet was 19:42 for 6K.