ROCHESTER, Michigan -- The path to the 2013 NCAA Division One Outdoor Track and Field Championships begins at North Carolina A&T University where the NCAA Division One East Preliminary Round will take place May 23- May 25. Many top collegiate track and field athletes from the State of Michigan have qualified.

The top 48 NCAA Division One track and field athletes from the East region in each event have qualified for this meet. Following this weekends’ meet, the top 12 athletes in each event will move on to the NCAA D1 National Championships in Eugene, Oregon, June 5-8. The NCAA D1 West Preliminary Round takes places at the University of Texas-Austin this weekend as well.

Here is a look at some of the standouts in the East Region from the state of Michigan. 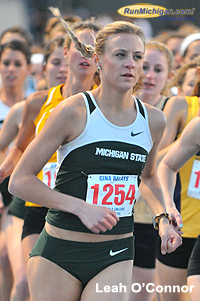 On the women’s side, Beth Rohl is the first seed in the Women's Discus Throw with a toss of 187’4”. Also representing the Spartans are Leah O’Connor, the two-time Big Ten Steeplechase Champion and 2013 5,000 Meter Big Ten Champion. She enters Wednesday’s Regional meet seeded 3rd in the 3000m Steeplechase with a time of 9:53.53. Tori Franklin enters the Triple Jump in 2nd place in 44’0”.

The University of Michigan Middle Distance squad is well represented. Becca Addison is set to compete in the Women's 1500 Meters alongside teammates Shannon Osika, Amanda Eccleston, Brook Handler and Jillian Smith. The Wolverines are fresh off their 4x1500 win at the Penn Relays in April. Another Michigan Wolverine, freshman Cindy Ofili is seeded 14th in the women’s 100 Hurdles with a clocking of 13.30.

Representing Eastern Michigan University, Asia Rawls enters competition ranked 12th in the Women's 400 Meter Hurdles with a time of 58.32. Teammate Alysha Newman is set to compete in the Pole Vault seeded 5th in the region.

From Central Michigan, Devene Brown is ranked 5th in the Women's Discus with a throw of 177’1”. Finally, Kathryn Pickett of Western Michigan is set to compete in the Heptathlon ranked 11th.

In the Men’s competition, U of M is well represented. Ali Arastu holds the number one ranking entering the Men's 400 Hurdles with a time of 50.27. Teammate Keenan Michael is ranked 9th in the same event.

Additional Wolverines to keep an eye on are Kurt Reichenbach, ranked 6th in the Decathlon, 10th seeded Cody Riffle in the Shot Put and 8th ranked Ethan Dennis in the Hammer Throw.

Antonio James has the highest seed for the Spartans with a 5th place seed in the Discus Throw.
Max Babits of Eastern Michigan University is ranked 15th in the Men’s Pole Vault with a vault of 17’4.5”.

The Division Two Outdoor Track and Field Championships will be hosted by Colorado State University – Pueblo, also held May 23-25. Several individuals and teams from Michigan are set to compete. 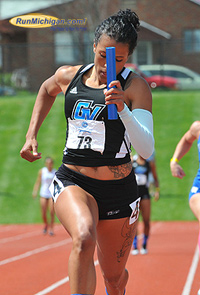 For the women, Grand Valley, the 2013 GLIAC Champions, has several athletes ready to compete. Distance notables include Madie Rodts, seeded 10th in the Women's 1500 Meters, Hannah Osborn ranked 10th in the 5,000 and 4th in the 3,000 Steeplechase and sixth-ranked Courtney Brewis in the Women's 10,000 Meters. On the men’s side, GVSU is well represented as always. Standouts include Larry Julson in the 1500, seeded 7th, and Alan Peterson who is ranked ranked 14th in the 5000 Meter Run.

The NCAA Division Three Outdoor Track & Field National Meet will be hosted by the University of Wisconsin-Lacrosse, also starting today, May 23 and running through May 25. 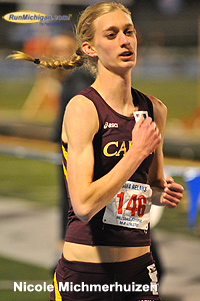 Representing Calvin College's men's team, Dan Kerr is ranked third in the Men's 10,000 Meter Run with a top time this year of 29:39, while Calvin teammates Sam Kerk and Matt Vander Roest have both qualified in the 5,000 and 10,000 meter runs. They are seeded in the top 20 for both events.

Representing Adrian, Andrew Mangiapane is ranked 15th in the men’s 3,000 meter steeplechase with a clocking of 9:07. 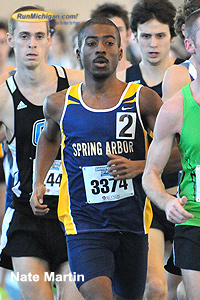 Additional athletes set to compete are Caleb Teachout of Aquinas ranked 6th in the men’s 800 in a time of 1:51.46 and Logan Moore of Sienna Heights in the 110m Hurdles seeded 4th. Mike Blaszcyk, former Novi High School runner and current University of St. Francis (Ill.) athlete, has also qualified in the 5,000 and 10,000 meter runs.

May 23-25. University of Wisconsin-Lacrosse. Lacrosse, Wisconsin