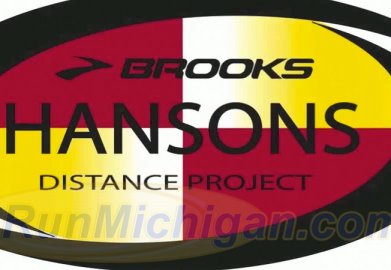 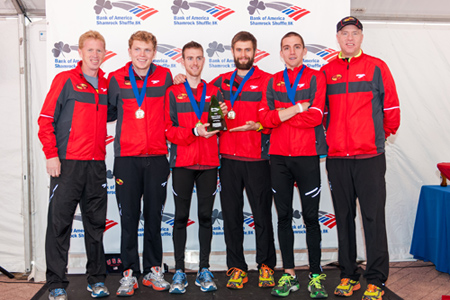 CHICAGO - More than 33,000 runners hit the streets of downtown Chicago to ring in the spring at the 34th Bank of America Shamrock Shuffle 8K. Sunny skies and ideal running conditions greeted participants with temperatures in the mid 50s, making for a festive atmosphere on the race course and at the Post-Race Party at Buckingham Fountain. The first runner across the finish line was Phillip Reid, 27, of San Luis Obispo, Calif., in 23:08. The women's winner was U.S. Olympian Lisa Uhl, 25, of Des Moines, Iowa, in 25:54. Reid's winning time was the fastest run on the course since 2002.

"We couldn't have asked for a better day to kick off the running season in Chicago," said Executive Race Director Carey Pinkowski. "After a long winter, we were blessed by Mother Nature today. The runners were able to take advantage of great running conditions. There were a lot of personal bests out there, and more importantly, it was a great celebration of running for the city of Chicago."

Reid was surprised to break the finish tape after U.S. Olympian Dathan Ritzenhein withdrew from the race earlier in the week. He earned a two-second victory over Hansons-Brooks team member Jacob Riley, 24, of Rochester Hills, Mich. Joe Moore, 29, of Minneapolis, Minn., was third in 23:14.

"I wasn't expecting to win," said Reid, a member of the Asics Aggies elite racing team and a high school teacher who was spending his spring break in Chicago. "My teammates and I came out here to compete with the best and that's what we did. Chicago is a great city."

Uhl's victory in the women's race did not come as a surprise, but was no less impressive. The Olympian is focused on qualifying for this summer's World Track & Field Championships in Moscow, Russia. The Bank of America Shamrock Shuffle 8K was her first competition in Chicago and her winning time ranks as the 12th fastest in race history. Second place went to Melissa White, 31, of Lake Orion, Mich., and the third place finisher was Dot McMahan, 36, of Oakland Township, Mich.

"I had a blast being part of such a large and exciting event," said Uhl, who runs professionally for Nike and is an assistant coach at her alma mater, Iowa State University. "I am used to competing on the track, so it was fun to run with thousands of others in an event that is such a big part of the community." 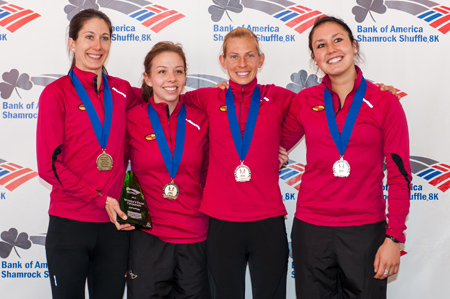 The 2013 Bank of America Shamrock Shuffle 8K included the USATF National Club Team 8 km Championships, featuring 49 elite club teams from across the country. The spirited team competition contributed to one of the most competitive fields in event history.

The Rochester Hills, Michigan-based Hansons-Brooks Distance Project won both the men's and women's elite club titles for the second year in a row.

The men posted a combined finish time of 1:33:45 among their top four finishers (an average finish time of 23:27). They were led by individual runner-up Jacob Riley.

The Hansons women's combined finish time among their top three finishers was 1:21:00 (an average finish time of 27:00). They were led by the second- and third-place individuals Melissa White and Dot McMahan

Before the race started, due to police activity along the Bank of America Shamrock Shuffle 8K course, a minor re-route was made. Race organizers worked with the City of Chicago to make the timely decision, which did not affect the start or outcome of the event.

Other Hansons-Brooks team members finishing in the top 10 for the men were Robert Scribner and Ethan Shaw. And for the women, coming in 10th place overall was former MSU track and field runner Sarah Boyle.


Release and photos courtesy of www.shamrockshuffle.com.