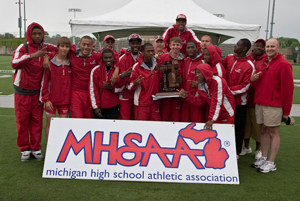 On the Boy’s side, the Albion Wildcats won all four relays throughout the day and collected a first place tie in the 400 meter dash. Albion’s Nolen Mitchell was the team MVP as he helped anchor the winning 800 and 400 Meter Relay, won the 400 Meter Dash and was a member of the first place 1,600 Meter Relay team. 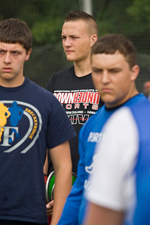 Jacob Patrick of Litchfield threw a new Finals Meet record in the Discus of nearly 20 feet farther than the previous record with a mark of 190-0. Detroit Cristo Rey’s Adam Abbott had a mark of 22-3.75 in the Long Jump which set a new Lower Peninsula Division Four Finals Meet record.