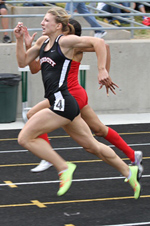 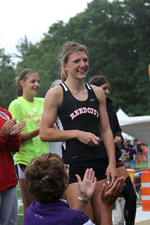 In her most impressive race of the day, she broke the 300 Meter Low Hurdles State and Division Three Finals Meet record. Mitchell also broke her previous Division Three record from a year ago in that event with a time of 42.23. Her time also broke Benton Harbor’s Carolyn Fergusson’s 28 year-old All Class and Division record.

In the team competition, the Frankenmuth Girl’s team scored in ten different events on their way to an 11 point victory over Benzie Central (63-52). Notable performances were turned in by Ashley Frahm placing fifth and third in the discus and shot put, respectively, a first place finish in the 800 and 1600 Meter Relay as well as Emily Wee placing fifth and second in the 100 Meter High Hurdles and 300 Meter Low Hurdles, respectively. 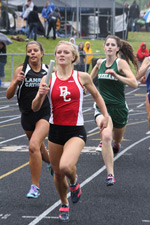 In the Boy’s competition, Lansing Catholic won the meet with 68 points and Union City was second with 45 points. Lansing Catholic recorded first place finishes in the shot put (Dan Liesman), the 3,200, 800 and 1,600 Meter relay and the 800 Meter run (Zach Zingsheim).

Jake McFadden of Clare won both the 110 Meter High Hurdles and the 300 Meter Intermediate Hurdles. Chris Maye of Union City was also a two time champion as he won the 100 Meter and 200 Meter dashes while taking second in the Long Jump.