The 2012 Division 2 MHSAA Track and Field State Meet, held at Houseman Field in Grand Rapids on June 2, was a meet full of great performances. And like most of the Lower-Peninsula state meets in the Grand Rapids area, the weather did its part to make for an eventful day. 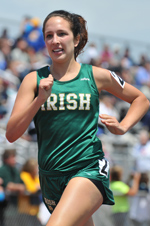 Sara Barron of Notre Dame Prep had several key performances. Barron broke the Finals Meet Record for the Girl's 1,600 Meter Run with her first place finish in 4:51.67. She also finished first in the 800 for the second straight year while helping her team to a third place finish in the 1,600 Meter Relay. Barron had to hold off a very tough challenge from Allendale's Ali Wiersma to win the 1600. Barron had the lead after an up-tempo first 800 and had to dig down a bit deeper than she had anticipated to finish ahead of Wiersma, who had momentarily pulled in front during the latter part of the race.

Wiersma then narrowly set a new Finals Meet record in winning the girl's 3,200 Meter Run with a time of 10:40.22 -- an amazing performance considering the earlier battle in the 1600 and also the wind and rain, which had both picked up considerably before the start of the 3200. 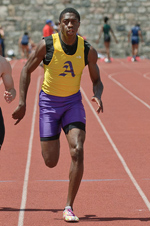