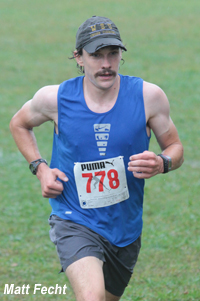 On June 18th of this year, Matt Fecht of Warren, Michigan set a Personal Record of 2:18:52 at the 35th Annual Grandma’s Marathon, which punched him a ticket to the 2012 U.S. Olympic Men's Marathon Trials to be held on January 14, 2012 in Houston, Texas. Matt is a 2001 graduate of Warren Mott High school and graduated from Wayne State University in 2008 where he was a member of the cross country team. Matt was an NCAA II All-American runner at Wayne State. Matt is currently an assistant coach for Wayne’s Cross Country program and trains on the streets of both Warren and Detroit.

Long time competitor, friend, and sometimes training partner, Anthony Pavicic, caught up with the local Olympic Trials qualifier and he spent some time asking him a few questions on his PR marathon performance, training, and the feeling of getting his goal. First off, congratulations on your recent Grandma’s Marathon performance.

Thank you. How much of a PR was it?

I am not really sure but around 2:30 or 3 minutes. How did the race pan out? Did it go as planned?

Definitely not as planned (laughs). I was rolling slow for the first couple miles and couldn’t get going and had some bad miles. I was 1:09.10 through the half and realized I would have to run that again in order to hit the qualifying time (2:19.00). I ended up dropping a 4:50 mile for the next two miles and was in fear that I would make the same mistake that I did the previous time I tried to hit the qualifying time and not be able to come back the second half. Matt, what kind of training were you doing leading up to the race?

I was putting in between 100 to 110 miles (per week) with a mid-week long run of about 14-16 miles, a long run anywhere from 16 to 22 miles, and two workouts during the week. The workouts would be 3x3 miles, 2x6 miles or 10x 1mile or somewhere along those lines. Matt, if I remember correctly you had no friends or family watch you at Grandma’s Marathon where you hit the Olympic Trials Qualifying Time?

You’re right. It was funny I knew some people who ran the course before and I read about the course before I raced and knew it was not a spectator friendly course. It’s a point-to-point course and its run around a highway. I was fine with nobody coming to watch because my airplane ticket was expensive as it was and it wasn’t like anybody was going to run the race with me or anything. It was a little bittersweet at the finish line, however. I was actually stuck up there for an additional two days all by myself and wasn’t able to celebrate or anything like that with family or friends. Matt, I know you train on your own and you have no sponsors or endorsements. Does it make it more challenging for you training/racing on your own or does it give you an incentive to go out there and prove yourself?

I think it’s a little bit of both. It would obviously be much easier with a sponsorship and not having to work four jobs like I do now. But at the same time if I can run the long runs and workouts by myself I’m going to be that much better. I’m not saying that I have not received help from any of my friends but 90% of my runs are done solo. Guys like yourself, Mike Buslepp, Joe Verellen and Nick Allen sometimes run with me or help by even just pacing me through some miles in the middle of a workout. You know you and I have been friends, competitors, and somebody to run with once in a while when you are nice enough to slow down for me (laughs). You’ve beaten some elites and also some runners who are sponsored. What do you think about that or do you not really think of it at all?

It’s always nice to beat some of those guys out there you know those guys who put in a small amount of hours and get paid to run and have their housing and things like that paid for. They’re all around the country but at the same time and more importantly I’m running against myself and the clock. For the Trials qualifier I had to hit 2:19.00. There’s 149 qualifiers and it doesn’t matter if they’re sponsored or not, it’s all about the clock at that point. Do you have any races before the Olympic Trials?

I’d like to get down south to train or possibly run a half marathon before the trials but it’s like I have unlimited funds where I am able to do something like that. Will you be doing a fitness test before the big day in order to get a gage on what type of racing shape you’re in? If so, what?

Ideally I would like to get in a half marathon but the workout I do like a 2 x 6 miles or 3x3 miles give me a pretty good indication of where I am at. I don’t want to put a 100% gage on a half marathon because at the end of the day it’s only 13.1 miles, not 26.2. I typically like to gage what type of shape I’m in by comparing similar training segments of the past. What is your goal in Houston?

For me goal number one is to finish and to put myself in a position to run my own race and not worry how it goes out. In 2007 the race went out in 5:25 mile pace the first few miles. I know I am not going to be out front and if the race does go out easy I don’t mind taking it easy for a bit. I am ranked 70th right now and I would like to chop it in half and finish top 35 and that would be a huge accomplishment for a guy like me. I know realistically I don’t have a shot at the top 3 (top 3 qualify to the Olympics) and I won’t be dumb enough to go after it (laughs). I think playing it safe and going for my goal place and from a small time kid from Warren I’d be happy with that. My friends and people I talk to remind me that only 150 people in the United States are able to do this and it feels pretty good when I hear that. How has the support of family and friends been throughout your career and especially since qualifying for the Olympic Trials?

My parents have always supported my baseball, hockey, and high school and college cross country. They have only missed about five of my meets in their life. We’re talking twelve hour road trips that they would go on to watch me run. All my friends as well have been great as you guys (Matt’s friends) had that party for me upon my return from Houston. Some have questioned that I haven’t had a full-time job yet and still running and being competitive but now they’re telling me I was right the entire time since I qualified for the Trials. But I keeping telling everybody that I don’t want them to come to Houston to watch me because apparently I run well when nobody comes to watch! What are your post-Houston plans?

I know I’m going to have a tough time starting back up as this is been a pretty big build up. I’ll still run afterwards whether I blow up and run a 2:50 or PR with a 2:16 or something like that. You may see me at the starting line at the Boston Marathon and see where that takes me. I’d like to stay in the Detroit area or I may be running for some team or something, only time will tell. No matter what, I’ll still be running and having fun and representing Wayne State University, Warren Mott High School and everybody who has supported me along the way. I know you just missed the Olympic Trials qualifier a couple times. How does it feel now that you have hit that time and you’re going to the big dance? What goes through your mind?

It’s pretty crazy to be honest and it’s pretty surreal. Its one of those things where I didn’t know that I would make it but once I did it was very special. We wish Matt good luck on January 14th, 2012 in Houston! About the interviewer